E5M1: Baphomet's Demesne is the first map of SIGIL. It was designed by John Romero and uses the music track "Romero One Mind Any Weapon" by Buckethead as well as "Hate Machine" by James Paddock (Jimmy). The par time defined in the DEHACKED lump is 1:30. 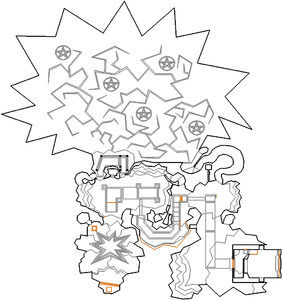 Map of Baphomet's Demesne
Letters in italics refer to marked spots on the map. Sector numbers in boldface are secrets which count toward the end-of-level tally.

This level introduces a reoccurring theme in the episode: shooting the "Evil eye" decoration (or, technically, the wall behind it) will trigger a switch, raising platforms or doors for progression or sometimes opening secrets. 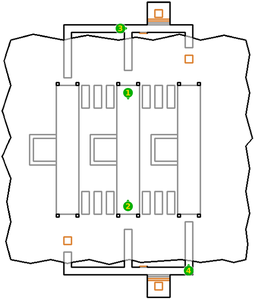 This level includes its own, separate deathmatch arena. There are teleporters at the northernmost and southernmost parts of the map that lead to the main part of the map but to access them, two different switches need to be pressed simultaneously - each one found near their respective teleporter. When the arena is left, a door near the COOP spawn of the map will open to allow combatants to re-enter the DM part.

The five pentagrams found on the map are intended to symbolize the five episodes of Doom (four official, plus SIGIL itself).[1]