E5M1: Logos Anomaly is the first map of Doom: The Lost Episode. It was designed by Xaser and uses the music track "Kick Their Asteroid" from DemonStar, composed by Robert Prince. The par time defined in MAPINFO is 30 seconds. 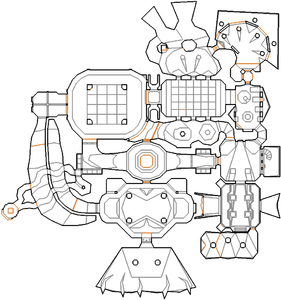 Map of Logos Anomaly
Letters in italics refer to marked spots on the map. Sector, thing, and linedef numbers in boldface are secrets which count toward the end-of-level tally.

Take the blue and yellow keycards in the starting area then go north into a chamber with two zombiemen. Turn left and open the door (requiring the blue key) then head past the monsters here to a round room with a shotgun in the center as well as health and armor bonuses. Head west to a wall with round holes and kill the imps and zombiemen behind it then turn right to kill a demon, plus one or two imps on Hurt Me Plenty (HMP) skill level or higher. Go through either of the round doorways to a room with a square nukage pool then turn right and head through the east doorway to a Hellgrowth room with many moving platforms.

Kill the zombiemen (and shotgun guys on HMP or higher) then step over the platforms to a room with an exit door. Kill any waiting imps and spectres then take the red keycard sitting in the south-west corner, use it to open the exit door and press the eye switch on your right to finish the level.

In the room with the shotgun, there is a door to the south (requiring the yellow key) that leads to a hall with another red keycard; if you enter this room then the red key in the exit room will be permanently hidden behind a wall. Approach the red key sitting on the computer terminal and it will be replaced with a set of bars; this will also lower a pillar in secret #6 holding another red key, which you must pick up to finish the level.

Taking the red key in the penultimate room will raise a wall at the entrance to this room, preventing you from backtracking unless you have used the passage past secret #8 which will open another exit from the room. You can lower the wall again by going through the door to the south room.

* The vertex count without the effect of node building is 1668.

This level is based on the layout of the first map from Doom v0.5.