E5M1: Ochre Cliffs is the first level in The Stagnant Demesne episode of Heretic Shadow of the Serpent Riders. 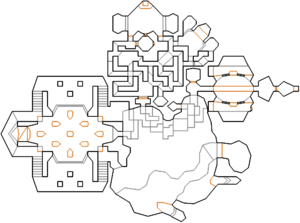 Map of Ochre Cliffs
Letters in italics refer to marked spots on the map. Sector, thing, and linedef numbers in boldface are secrets which count toward the end-of-level tally.

This is perhaps one of the most difficult levels in the whole game, particularly when playing on Smitemeister difficulty, with several Iron Liches and a Maulotaur. Conservation of ammunition and artifacts is essential. Use the Elven Wand whenever feasible. Whereas the area on the west side of the map with the yellow key should not present too great a problem, being quick on your feet and retreating out to the main area when the Undead Warriors appear is helpful. The center labyrinth behind the yellow door is full of Golem Ghosts, and using the Gauntlets here is recommended to save ammunition. At the lava pit and surrounding ledges on the east side of the map, do not hang around in that packed area or you will be killed instantly. Instead, go through the teleports. The Maulotaur and Iron Liches will likely follow, which leads to the entrance of the lava pit back to the outside foyer, which provides much needed space to maneuver. Do not bother killing the Maulotaur unless you have a Tome of Power ready, as it would be a gross waste of ammunition. Instead, lure it into another part of the map such as the labyrinth where it will (hopefully!!) not bother you.

If you DO have a Tome, then dispatch the Iron Liches as they appear. Once it's the Maulotaur, use the Tome and Gauntlets. This will keep you going by sapping life from your enemy, but be prepared for whatever comes through after the Maulotaur kicks it.

Timing is crucial, as the Tome lasts just long enough to do the job and the gauntlets alone won't cut it.

* The vertex count without the effect of node building is 676.