E5M2: Rapids is the second level in The Stagnant Demesne episode of Heretic Shadow of the Serpent Riders. 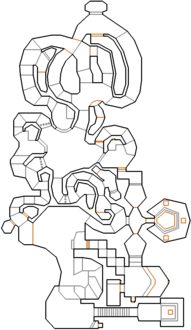 Map of Rapids
Letters in italics refer to marked spots on the map. Sector, thing, and linedef numbers in boldface are secrets which count toward the end-of-level tally.

From the start, turn right and fight the current to grab your Ethereal Crossbow, then fight your way down the falls. Pass the yellow door and head downriver into the brown cave passages. You'll soon pass the yellow key, but can't reach it yet. Continue following the river, going against the current as needed, to find a switch which lowers the key. The Gauntlets of the Necromancer are also in this area, off slightly to the side. With the yellow key, head back to the corresponding door and through. The switch reveals monsters, the Dragon Claw and a second switch. This switch lets you escape the room, but collect a Bag of Holding from the ambush chamber before you go.

Head back towards the switch that gave you access to the yellow key; the nearby bars have been removed now. Passing beyond, you'll find a larger underground waterway obstructed with some exploding pods. Follow the looping river to the north as it curves around to the weredragon-guarded ledge where the green key is stashed. With the key, drop down into the pod room and head through the green door, going upriver to a switch. This opens the bars on the other side of the pod room, and you can once again fight your way upriver to the ledge overlooking the yellow door. Drop down and return to the start. The corridor where you found the crossbow has risen into stairs leading to a blue trident pad. The fact that there's no glitter on this pad should make you wary; it's not an exit but a trigger that drops the walls and reveals disciples. Once you've hit this trigger, head back down and find the true exit now open.