E5M2: The Infernal Palace is the second map of Doom: The Lost Episode. It was designed by Xaser and uses the music track "Enter the Hero" by Robert Prince, originally made for Xenophage: Alien Bloodsport. The par time defined in MAPINFO is 1:00. 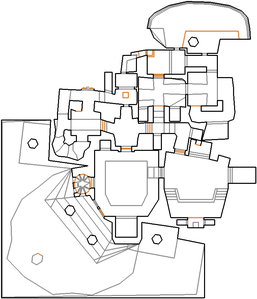 Map of The Infernal Palace
Letters in italics refer to marked spots on the map. Sector, thing, and linedef numbers in boldface are secrets which count toward the end-of-level tally.

Press the eye switch in front of you to be carried up to a courtyard and kill two approaching demons then climb the steps ahead and take the shotgun and shotgun shells between the red columns, watching out for imps hiding behind them. Go through the door at the top of the steps to enter an open area with a couple of imps and demons then go through the north door to a T-junction, ready to kill a cacodemon on Hurt Me Plenty (HMP) skill level or higher. Turn left and go through another door then head straight forward between two ledges with imps, turn right at the junction then turn right and right again at another junction to reach the northern imp ledge and press the eye switch here. Return to the second junction and turn right to reach the red skull key - taking it will open two closets containing imps and demons, so leave the room quickly to avoid being trapped.

Return to the T-junction and go through the right-hand door then turn left to enter a room with a cross-shaped walkway, watching out for an alcove that opens to your right containing one or two demons. Go straight on through a door between red skull markers and you will see a wall lower in front of you to reveal a teleporter, along with another low wall to your right that will allow a revenant to reach you on Ultra-Violence (UV) and Nightmare (NM) skill levels. Step into the teleporter to be sent to a nearby ledge with zombiemen and turn left to face demons or cacodemons depending on skill level - once they are dead, follow the passage round to the blue skull key.

With the blue key, step off the ledge to the lava below and turn left to return to the room with the cross-shaped walkway. Kill the demon (and cacodemon on HMP or higher) that have been released into the room then head south up some steps to kill one to three imps. Turn left again at the top of the steps and follow the passage until you go through a door with blue skull markers, which leads to an outdoor area with a couple of imps. Climb the wooden steps in this area to see a small alcove with the yellow skull key in it - approach with caution as taking the key will open several closets in the area containing imps, including two on your left and right.

After clearing out the imps, go down the steps and enter the closet in the north wall to find an eye switch which will open the door in the west wall. Go through this door to return to the first area of the palace, which now contains a number of imps and one or two demons. After clearing the area, open the west door between yellow skull markers and press the eye switch behind it to finish the level.

The west alcove in the room with the cross-shaped walkway, which opens after stepping off the ledge with the blue key, contains a chaingun and two boxes of bullets.