E5M3: Ominous Lair is the third map of Doom: The Lost Episode. It was designed by Wills and uses the music track "Sinister" by Robert Prince. The par time defined in MAPINFO is 4:00. 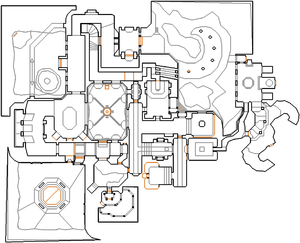 Map of Ominous Lair
Letters in italics refer to marked spots on the map. Sector, thing, and linedef numbers in boldface are secrets which count toward the end-of-level tally.

Take the shotgun in front of you and kill an approaching demon, then go through the wooden door and kill another demon waiting behind it. Turn right to see two or three shotgun guys near another door and open it, kill two or three demons waiting behind it then turn left and follow the passage past some imps to a metal wall, which you can press to lower a lift with a medikit. Ride the lift up and kill two more imps then follow the tunnel past several armor and health bonuses (plus another imp) to find the yellow skull key sitting on a ledge.

Kill the imps and spectres below then drop off the ledge and leave the room by the south door, where imps are waiting to the left and right along with a Hell knight (or baron of Hell on Hurt Me Plenty (HMP) skill level or higher). Head east to see a small door with yellow skull markers and open it to confront several imps and a mancubus, then go through the door on your left to enter a room with a pillar holding the red skull key. Kill the imps here then head east into a tunnel and follow it until you reach a wooden hall with a demon and two revenants. Press the satyr switch on the east wall to lower the floor, then head south past two imps to a cavern that contains a cacodemon and two lost souls, plus a mancubus on HMP or higher.

Kill the monsters then go into the water to find a chainsaw and a switch that will raise a set of steps out of the cavern. Climb the steps and go through the wall that opens at the top to return to the tunnel, then follow it back to the red key room where some monsters have teleported in. Take the red key then backtrack through the yellow key door to confront some more enemies, including an arachnotron on HMP or higher and a baron on all skill levels, and head west into a lit corridor then south until you see a door on the left with red key markers. Open it to confront some imps on HMP or higher (plus a revenant on Ultra-Violence (UV) and Nightmare (NM)) then go through another red key door on your right and follow the passage to a lion switch.

Press this switch and another lion switch revealed behind it, then go back to the previous area to find that a bridge has risen over the lava leading to an exit door - kill the pain elemental that has been revealed then go through the exit door, kill a waiting imp and press the gargoyle switch it was guarding. The switch is a trap and you will drop into a small room containing zombies and imps - kill them then press the satyr switch in the south-west corner, which will raise a step by the exit door and allow you to go back through it. Go through the red key door in the east wall then turn left and follow the lit corridor until you reach another door with red skull markers - open it and take the megaarmor (which will trigger secret #3) then walk through the window on your left to reach the exit room. Kill the lost souls and cacodemons here then take the various items and step on the patch of sky in the middle of the room to finish the level.

A blue skull key can be found at the north end of the exit room. Pick it up then leave the room by the south door and turn right - you will see a door by a wooden step that requires the blue key to open. Go through the door to find a nukage pool containing a rocket launcher - taking the weapon will close the entrances to the room for 30 seconds and you will need to content with a number of monsters, including two arachnotrons on HMP or higher.

From the start, go through the door and follow the passage. Instead of going through the door leading to the yellow key, follow the passage round until you find several imps guarding an invulnerability powerup. Go through the wooden door on the right to get outside and confront some imps and demons. There is a chainsaw sitting on a pillar surrounded by nukage - press the skull switch in the north-west corner to reach the weapon.

After going through the second door from the start, turn right and climb the steps to find a chaingun along with shotgun shells and a stimpack.

* The vertex count without the effect of node building is 2025.

This level is based on MAP15: Spawning Vats from various console versions of Doom, which was radically altered from its PC counterpart to fit the consoles' hardware limitations.