E5M3: Quay is the third level in The Stagnant Demesne episode of Heretic Shadow of the Serpent Riders. It contains an entrance to the secret level E5M9: Skein of D'Sparil (Heretic). 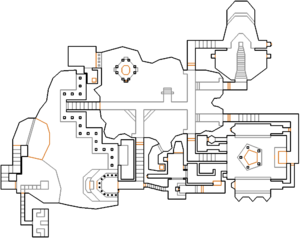 Map of Quay
Letters in italics refer to marked spots on the map. Sector, thing, and linedef numbers in boldface are secrets which count toward the end-of-level tally.

From the start, head up and find both an Ethereal Crossbow and a Tome of Power. Some fire gargoyles are waiting and an iron lich may try to snipe you from afar. Once you're geared up, drop down into the water and step onto the platform to the immediate northwest to lower a wall revealing more ammo and a Silver Shield. From the spot where you got the shield, head upstairs and find a yellow key, along with a passage that's opened onto the platform you dropped down from. When you drop into the large water area again, be prepared as there's now an open ambush containing a pair of iron liches. The chamber they emerge from contains some supplies that you may want including a Ring of Invulnerability. Now enter the large gray building via the open stairway.

Inside, you'll probably want to explore the large bridge room for supplies, but once you're done, take the higher of the two yellow doors. The area beyond is guarded by ophidians and overlooks the platform with the green key. Hit the switch you find nearby, which will raise stairs to the key and also release iron liches. Dash down onto the stairs, or if you prefer to play it a little safer with the lava, backtrack to the bridge room and use the other yellow door before you collect the green key using the stairs you just raised. Before you go, don't miss the Dragon Claw tucked on the lowest step, then either dash back to the upper level from the top of the stairs or teleport out using the side teleports in the lava.

Now that you have the green key, open the lower green door and draw aggression from the monsters inside, including a maulotaur. The maulotaur will be easiest to deal with if you can coax it into pursuing you into the bridge room, where you can then either fight it with space to dodge or simply avoid it. Now take the higher of the green doors and you'll come to a large dark room with barrels along the edges. The platform on the far side marked with banners is a lift activated by using the middle banner. If you're wand starting, this would be a good time to collect the secret Hellstaff from a nearby area. Now go up the lift to the corridor that loops back to the other green door, and find two banners matching the ones used to activate the lift. These are hidden doors, the one nearer the low green door having a switch to lower the blue key, the other having the key itself. Taking the blue key lowers an ambush with even more ophidians.

Returning to the bridge room and heading upstairs past the blue door leads you to a confrontation with the iron liches who were sniping you near the start. You come to their overlook where you'll find another switch which you should pull. You can also drop down to the ledge containing the Phoenix Rod and other desirable items; the wall with the banner activates a lift back up when used. Go back to the green key area and into the better-lit room of tan brick adjoining the Tome of Power room. The exit door has been opened and you can go inside, head down the corridor to pull a switch which lowers a small ambush in the room behind you, then head back and step onto the exit teleporter if you want to take the standard exit and go to Courtyard.

If the Firemace has appeared at the level startup, you will find it from one of six different positions. In order of appearance, they are located:

* The vertex count without the effect of node building is 967.