This level occupies the map slot E5M4. For other maps which occupy this slot, see Category:E5M4.

E5M4: Courtyard is the fourth level in The Stagnant Demesne episode of Heretic Shadow of the Serpent Riders. 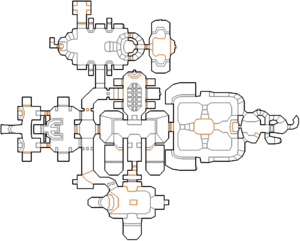 Map of Courtyard
Letters in italics refer to marked spots on the map. Sector numbers in boldface are secrets which count toward the end-of-level tally.

The beginning of this map is rather unforgiving when done from a wand start; as you come forward from your starting point, immediately turn left and push past the golems and nitrogolems to take a stronger position on the raised stairs. The two types of golem can infight, which should also be used to your advantage. If you eliminate them all before proceeding, you can collect Gauntlets of the Necromancer from the opposite stairway. Once you've secured your position, head through the two wooden doors nearby, passing crosswise through a dark slimy hall to come to a room with a trident-shaped basin occupying much of the floor. Head through the small wooden door on the right of the trident and up a lift to a room where you can acquire your Ethereal Crossbow. There are also two teleport pads; the one with the red sparkles is active and should be passed through.

In the dark room beyond, take out a couple of undead warriors on the nearby platforms, then run across the slime to the lift on the opposite side. Bridges now raise around the rim of the area which you can follow to the Dragon Claw. Once you've taken it, the yellow key will have lowered into the slime. Take it and hurry past the bars that have raised to escape this area. The teleport that you soon see takes you back to the crossbow room, but be aware that an ambush will be waiting. You could also push ahead, with the bars lowering as you approach them to lead you to the locked yellow bars where you need to go. Either way, once you pass these bars, hurry onward to an opulent throne room of sorts.

Upon the raised throne you'll find a Hellstaff, but beware as taking it also releases a maulotaur into this room. Head through either of the doors on the far end from the throne, up the spiral stairs and into a room with a switch. Pulling the switch lowers the nearby lifts where you'll find the green key. Of course, there is also an ambush. Inside one of the ambush closets you'll find another switch that will let you escape after being locked in this room. With the key, head back to the bars in the slime river; from this side the passage is behind the stained glass that has the trident emblem unlike the others.

Past the green bar, a lift takes you up to the blue room. The first wave here is ghost nitrogolems, after which there's a multi-tiered ambush. Taking the Phoenix Rod unleashes a wave of disciples and exploring their closets releases an iron lich. Inside the lich's closet you'll find a switch to pull. The switch reveals the blue key, overlooking the room near the start which you can drop into to get to the blue door. Beware as you may encounter some disciples that were released into this room when you took the yellow key, if you didn't clean them out previously.

Going through the blue door takes you at last to the titular courtyard, which is thoroughly infested with nitrogolem ghosts and has strong wind as well. Don't use your crossbow here unless you're down to nothing else; the dragon claw or tomed elven wand are your best options. Make sure to walk through the middle area of the courtyard to open the sides. Once the way is relatively clear, pull the switch in one of the side chambers and then head up the stairs at the far end of the courtyard, dropping into the water and looping around to another switch. This opens a passage over the stream which you can dash through to reach the exit switch.

The following locations do not count as a secret:

* The vertex count without the effect of node building is 1074.