This level occupies the map slot E5M5. For other maps which occupy this slot, see Category:E5M5.

E5M5: Hydratyr is the fifth level in The Stagnant Demesne episode of Heretic Shadow of the Serpent Riders. 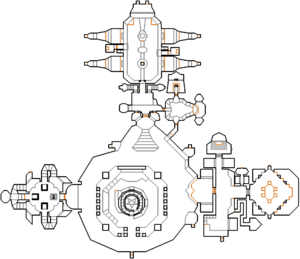 Map of Hydratyr
Letters in italics refer to marked spots on the map. Sector numbers in boldface are secrets which count toward the end-of-level tally.

From the start, drop into the water and follow the walls of the large central castle until you reach the break in the wall. Go in and head up the tower in the middle to find the yellow key. Before leaving the central area completely, you will also want to collect the Bag of Holding from the stairs along the outside of the tower and the Ethereal Crossbow from the ones along the inside of the outer wall.

With the key, head up the black stairs and through the yellow door. The wooden door to the left has Gauntlets of the Necromancer while the one on the right has a switch lowering a lift. Go up the lift and head up the nearby pair of stairs to pull a switch. This opens another pair of stairs mirroring the first, except leading down. Pull that switch too, then go to the middle passage and pull yet another switch before heading forward into the black and red room. On the back of the pillar ahead of you, find yet another switch, but first get the Dragon Claw further ahead near the green key. The switch lowers the sides of the room revealing a large number of monsters, so it's time for a fight. If you end up in the lava, the escape lifts are on the north end. Once you've seized the green key you can head back whence you came and head through the final wooden door in the black corridor, at the end of the hall. Beware as some undead warrior ghosts will come out behind you at the other end of the hall when you pass this way.

If you want, go for the Hellstaff by heading through the banner door on the left, but know that you will have to fight hard for it. The door on the right, on the other hand, will lead you to a ledge taking you to the green door. The room beyond the door is full of ghosts. Once it's safe to do so, investigate the walls that have spinal column markings. Of the lifts with timebombs on them, one leads to a secret with a Phoenix Rod, the other to a switch which raises the stairs in the black metal section of this room. Go up the stairs and pull the switch that is revealed, opening a monster closet below and the sealed door at the other end of the room, where the blue key can be found. A switch in the blue key room lowers the key, and of course, taking the key opens even more monster closets, but the one nearest the key also contains an Enchanted Shield. A door has also opened near the other sealed door in the large room, leading to a switch to open the way beyond, and yet more monster closets, this time with disciples.

Through the last sealed door, you'll find a teleport nexus with a Morph Ovum in the center. Take the morph ovum and the outer walls lower. Explore this area for a switch, hit it and the second switch that is revealed, and the teleports lower into reach, granting you access to various parts of the level. The place you want to return to is the start position, behind which is the blue door. The southwest teleport is the one that takes you there, or you could burn a Chaos Device as a shortcut, but if you want to max the level, explore the others as well since some take you to otherwise inaccessible places.

Past the blue door, be ready for a big fight. There are fire gargoyles, ghost nitrogolems, disciples and an iron lich all waiting in a rather difficult to navigate area with opening ambush chambers. Collect the supplies at the top of the four sets of stairs, then push the switch you find at the top of one of them. This releases the disciples and also opens another switch atop one of the other stairways, which must also be pulled. The second switch opens one of the square walls below and the exit switch is inside.

If the Firemace has appeared, you can have it at one of four different locations. In order of appearance, the places are:

If the weapon did not appear, the next chance to get it is on E5M6.

* The vertex count without the effect of node building is 1291.