This level occupies the map slot E5M6. For other maps which occupy this slot, see Category:E5M6.

E5M6: Unspeakable Persecution is the sixth map of SIGIL. It was designed by John Romero and uses the music track "Melting Man (part 2)" by Buckethead as well as "Besieged City" by James Paddock (Jimmy). This map also contains the secret exit to E5M9: Realm of Iblis. The par time defined in the DEHACKED lump is 7:00. 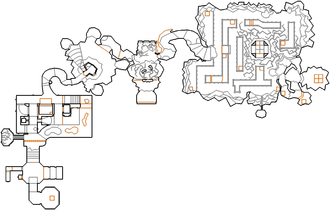 Map of Unspeakable Persecution
Letters in italics refer to marked spots on the map. Sector numbers in boldface are secrets which count toward the end-of-level tally.

To access the secret exit, go to east section of the map and take the series of teleporters until you have reached the southern-most platform, and hit the eye located inside a narrow corridor in the southern wall. This will open up a wall in the south-east cave where the series of teleporters ends. Inside the wall there is a teleporter pad surrounded by candles that will take you to the secret map, E5M9: Realm of Iblis. 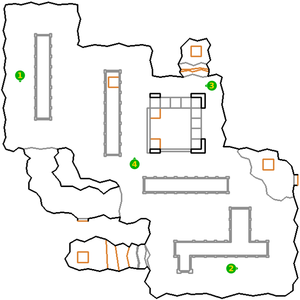 * The vertex count without the effect of node building is 3971.

During development, the series of floors over lava which descend when stepped on suffered spechits overflows and had to be simplified as a result.[1]