E5M7: Foetid Manse is the seventh level in The Stagnant Demesne episode of Heretic Shadow of the Serpent Riders. 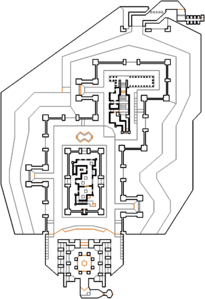 Map of Foetid Manse
Letters in italics refer to marked spots on the map. Sector numbers in boldface are secrets which count toward the end-of-level tally.

From the start, keep running forward along the outside of the area, dodging the sabreclaws, until you come to an overhang where a river passes under the outer wall. This is where you'll find the Ethereal Crossbow. Now continue on to the bridge in front of the yellow door and cross it; while it starts off too low to pass, it will rise when you step on it. To the right are Gauntlets of the Necromancer. Follow the castle wall back in the direction of the starting point to find the yellow key, which you can now use to enter the fortification. Inside, you'll be on the streets between some buildings. Unlike those outside, the sabreclaws in this area will make a nuisance of themselves if not eliminated sooner rather than later. Bars leading back to the outside of the castle will open when you approach them from the inside, leading to handy items, but when you're ready you should make your way to the south where you'll see a large black structure whose entrance is locked by a blue door. To the sides of this building, the western wooden stairway leads to a Dragon Claw while the eastern one takes you to a switch which you should pull. Beware of disciples lurking at the sides of the black building.

Now head back to the northeast section of the castle, where you'll find the stairs along the inner wall can now be reached as the metal block has raised. Head up and follow the ramparts, dashing across the gap that you come to, until you're overlooking the well containing the green key, where you can drop down to collect it. It is easier to hit the landing correctly when approaching from a diagonal angle. Go upstairs again and dash across the gap to the building with the green door. This is easiest done approaching from the west. Head through the green door and down into the building. There are some useful items in this region including the Hellstaff. On your right as you descend you'll find a room which darkens when you enter, containing a switch which will make a nearby teleport accessible. Now go through the teleport at the bottom of the stairs which takes you to the other building.

Exploring along the walls of the building will lead you to a black metal pillar with a switch to open your path further inwards. Once inside, shoot the thin wooden barrier blocking your way south to open it. This also releases a monster ambush. Further on, head up a short flight of stairs to Wings of Wrath and a teleport. This teleport takes you to the tower overlooking the outer moat of the castle grounds. You'll find a switch here which opens the passage down below this point, where you got your crossbow earlier. Drop down and follow the waterway to the blue key.

Beyond the blue door, you'll find an Enchanted Shield which, when taken, activates the red ring in the ceiling as a crusher and opens the outer walls of the building, releasing more disciples. At the back of the building is a lift that's triggered by approaching it. At the top of this lift, you'll find the exit, with a few final disciples.