E5M7: Threshold of Pain is the seventh map of Doom: The Lost Episode. It was designed by Xaser and uses the music track "Smells Like Space" from DemonStar, composed by Robert Prince. The par time defined in MAPINFO is 2:22. 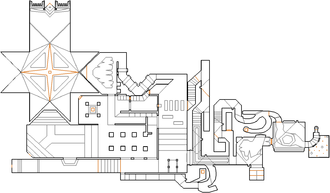 Map of Threshold of Pain
Letters in italics refer to marked spots on the map. Sector, thing, and linedef numbers in boldface are secrets which count toward the end-of-level tally.

Take the shotgun then head down the stairs to a room with imps (plus some shotgun guys on Hurt Me Plenty (HMP) skill level or higher) and go straight ahead through the door. Turn left and cross the room, then head straight forward down the hallway with the water trench and turn right at the end, passing imps and lost souls on the way. Climb up a staircase and keep going forward - an alcove will open behind you containing one or more pain elementals guarding an armor pickup. When you reach a dead end with a berserk pack, turn round and you will see another staircase on the right. Climb this and you will see a wall open in front of you - head through here to an outdoor area and drop to the ground.

When you land, turn right and you will see a narrow gap in the wall ahead - go through here and follow the path past some imps and a revenant until you see the red skull key in front of you under a low ceiling, guarded by two Hell knights as well as one or two arachnotrons on HMP or higher. Take the key then return to the previous outdoor area where more monsters have teleported in including zombies, mancubi and one or two barons of Hell. Head south up the steps - at the top, look left to see a hole you can drop down to return to an earlier hallway, then head back up the staircases to the area where you can get outside. This time run straight forward across the platforms until you reach a partial invisibility powerup, then open the wall in front of you to find a room with a door between red skull markers.

Go through this door and head straight ahead until you drop off the ledge (landing on a berserk pack) then turn left and head forward until you see an outdoor area with blood pools on your right which is guarded by arachnotrons. Follow the rock path and take the left-hand fork then climb the steps with health bonuses and press the switch at the top. This will open a section of wall in the blood pool on your left; go through it and grab the supercharge on the other side before dropping to the ground. Turn left and climb the staircase to find twelve boxes of rockets - when you reach the top of the stairs a wall at the opposite end of the hall will open to reveal arachnotrons, revenants and shotgun guys. Head back down the hallway and dispatch the enemies, then climb the steps they were guarding and press the skull switch at the top. Return to the other end of the hall and you will see that a wall has opened on the right; go through it and take the blue skull key before dropping off the ledge.

After jumping off the ledge, follow the hallway back to an earlier part of the level. From here, retrace your steps to the red key door and go through it then walk straight forward off the ledge, watching out for zombies that have teleported in. Keep going forward until you see some blue skull bars guarded by two revenants and open them, then press the switch they were concealing - the marble walls behind you will lower, revealing a teleporter which you can step into. You will arrive in a large eight-pointed arena containing four pain elementals, and several more will teleport in (twelve on Ultra-Violence (UV) and Nightmare (NM) skill levels, or eight on HMP or lower) along with four revenants. Step off the brown star you arrive on and the marble walls in front of you will start to lower and will eventually reveal knights, two arachnotrons and a cyberdemon. Defeat all the enemies here, then press either of the eye switches at the north end of the arena to finish the level.

As the level starts, turn round to find an armor in front of the "entrance door".

After passing through the second room, you will have a choice of going straight forward or entering a hallway on the right. Taking the latter path can lead to several useful items, as well as being required to find secret #1.

After crossing the platforms to the room with the red door, you will also see a staircase leading upwards away from the door. Follow it and open the metal wall at the top to reach a balcony holding a backpack and a plasma gun, among other items.

In the outdoor area with the large blood pools, the right-hand fork in the path leads to a set of steps with a rocket launcher at the top, as well as several rockets on the steps.

After getting the blue key and dropping off the ledge, follow the hallway until you see a small alcove on the right holding another berserk pack. It will be guarded by a lost soul, or a knight on UV and NM.

This level is based on MAP30: Threshold of Pain from the Sony PlayStation version of Doom and has a largely identical layout, with changes to texturing and the number and variety of monsters.