E5M8: Field of Judgement is the eighth and final level in The Stagnant Demesne episode of Heretic Shadow of the Serpent Riders. As in the episode Hell's Maw, the player is faced with a group of Maulotaurs as a boss. 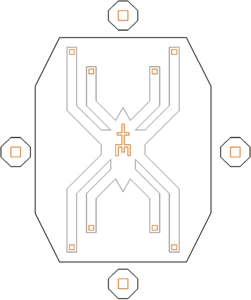 Map of Field of Judgement
Letters in italics refer to marked spots on the map. Sector, thing, and linedef numbers in boldface are secrets which count toward the end-of-level tally.

The player starts in a spider-shaped enclosure containing all the weapons minus the Firemace, and lots of artifacts and ammo. Don't get the Silver Shield yet, since there is an Enchanted Shield shortly after. Once you've collected the weapons and as much ammo as you can carry, activate the Wings of Wrath (located on the center trident prong) and fly over the trident to lower the outer arena to begin the episodes boss battle against a group of Maulotaurs.

Once the walls have lowered, run and collect the newly revealed Enchanted Shield and Tome of Power, and begin circle strafing the Maulotaurs while firing with a weapon of your choice with the intent to gather the Maulotaurs together. Once they're in a tightly packed group, a highly effective strategy is to activate the Ring of Invincibility and Tome of Power simultaneously, and use the Phoenix Rod's flamethrower at point blank range for maximum damage (hold down the fire button the whole time to conserve ammo). Once the Invincibility expires most of the Maulotaurs should be badly hurt, if not dead. Finish them off by whatever means necessary; there is nothing beyond this point so hit them with anything you want.

Once the final Maulotaur is destroyed, the eight posts at the corners of the 'legs' will lower. Choose any one to finish the level (and, finally, the game).

In vanilla Heretic, the game can crash with a visplane overflow error if the whole level is in your field of view after the posts are lowered. This has the highest probability of occurring near the north-east, south-east, south-west and north-west corners.

* The vertex count without the effect of node building is 162.