Unchecked
This level occupies the map slot E5M8. For other maps which occupy this slot, see Category:E5M8.

E5M8: R'lyeh Rising is the fifth boss map of Strange Aeons, and the final map of the megawad. It concludes the storyline of the bonus episode, Out of the Aeons, added in 2016. 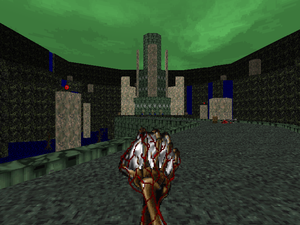 The eerie tower of Cthulhu. 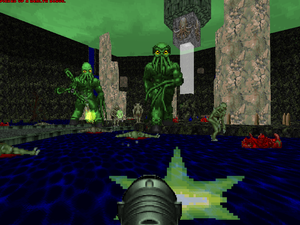 The Children of Cthulhu amidst a sea of Vulgars.

The player has roughly ten seconds before the waters rise, turning the map into a watery arena filled with gangs of poison-spewing Vulgars. Shortly thereafter, the tower collapses into the floor and unleashes the Children of Cthulhu upon him: anywhere from 2 to 3, depending on the difficulty. Killing them all reveals the exit slipgate.

These towering, tentacled abominations aren't the toughest boss monsters in the megawad, but their attacks are quite deadly. Their main attack consists of repeatedly firing green seeker projectiles at the player until he dies or reaches cover behind a soapstone pillar. They periodically turn invisible to confuse your aim. They move slowly, but if they manage to get next to you, their tentacles will murder you in one or two hits.

Alarmingly the Children of Cthulhu can also revive dead monsters just like the Archvile. Unlike the Archvile, they can even revive each other, making this boss fight a tag-team match of sorts. Your best chance of survival is to get all the powerups and separate the bosses before killing them one by one, or softening them all up before finishing them off in rapid succession.

There is a switch hidden behind the Soul Sphere. Flip it to reveal another behind the Blue Armor. The new switch lowers the Ammo Spheres which sit out of reach atop the soapstone pillars.