E5M9: Skein of D'Sparil is the secret level in The Stagnant Demesne episode of Heretic Shadow of the Serpent Riders, and can be accessed from E5M3. 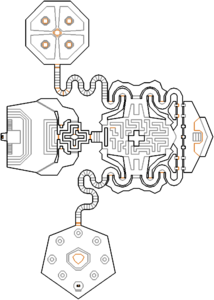 Map of Skein of D'Sparil
Letters in italics refer to marked spots on the map. Sector numbers in boldface are secrets which count toward the end-of-level tally.

You begin in a green maze, which has some lurking sabreclaws. Proceed quietly, avoiding the enemies until you can reach the outside of the maze, otherwise you may be pinned between monsters and killed in the narrow passages. Once you've reached a spot with suitable mobility, you can start picking off the sabreclaws one or two at a time. Once things are relatively clear you can search the maze for a wall marked with a golden trident, located in the west section; using this will lower a lift taking you to the upper level of the maze, where you can dash across the tops of the walls, collecting ammo. There are ophidians on the corner ledges, but also useful weapons and items. Once you have the Ethereal Crossbow, head to the north and get the Gauntlets of the Necromancer as well, then follow the windy passage to the right, pulling the switch you encounter. This opens the nearby side walls, where you can find a Bag of Holding and Dragon Claw in the chambers on one side and the yellow key in the larger room on the other. Taking the key opens a monster closet with fire gargoyles. Now continue following the twisty passages clockwise, being wary of the ophidian-infested side areas, which are heavily guarded but include useful items including Wings of Wrath and the Hellstaff. Eventually, the twisty corridor leads you downstairs to the yellow door.

Beyond the yellow door you find a sort of lava forge. At the far end of the room go behind the switch to find the step up to reach it. Pulling the switch lowers the central lavafall, revealing an iron lich and the green key. When you get the key, the rest of the lavafalls drop, releasing ophidians. With the key, follow the twisty passages all the way back in the counterclockwise direction, encountering a few more ophidian closets now open along the way. Down another set of stairs is the green door.

In this room, the disciples may be more use to you alive than dead: pushing on the central black pillar will reveal the blue key and lowers four iron liches onto the lava pillars. Once they've come out to play, try to get a good infight going before you clean up. If you've kept them from earlier, both the Shadowsphere and Wings of Wrath are useful in this room. Crossing one of the pillars that had a lich on it will open the doorway out that seals when you take the key. You could also "cheat" the trap by burning a Chaos Device. However you tackle it, take the blue key back to the bottom level of the green maze area and find the blue door to the west.

Follow the narrow corridors to the right and keep an eye out for the first spinal column wall. Open this hidden door to find a Phoenix Rod and a switch, guarded by a sabreclaw ambush. The switch will release disciples into the outer corridor so be careful. Explore the disciples' side chambers if you want, but your main goal is through the wooden door and across the indoor lake to the top of the big black structure where you'll find the exit switch open.