E5M9: Wayward Outpost is the ninth and secret map of the Base Instinct episode in Doom the Way id Did: The Lost Episodes, which can be accessed from E5M3: Recycling Plant. It was designed by Michael Fraize (Marcaek) & Jason Root (Hellbent) and uses the music track "untitled". The par time defined in MAPINFO is 2:45.

Completing this level takes the player to E5M4: Decayed Refinery. 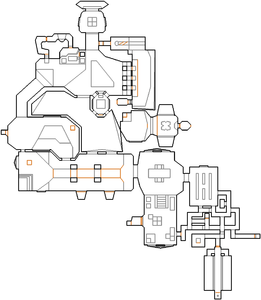 Map of Wayward Outpost
Letters in italics refer to marked spots on the map. Sector, thing, and linedef numbers in boldface are secrets which count toward the end-of-level tally.

* The vertex count without the effect of node building is 849.