This level occupies the map slot E6M1. For other maps which occupy this slot, see Category:E6M1.

E6M1 (aka Raven's Lair or Offices) is the first of three bonus levels in the Heretic: Shadow of the Serpent Riders expansion. It uses the music track "Drive", created by Kevin Schilder.

This level and episode name are in fact Untitled and can only be accessed via a warp command. According to the Heretic FAQ, a map creator by the name of Sailor Scout came up with the name Fate's Path for the episode name and Offices for the map name. The wHeretic source port offers this "episode" on the main menu using the names Sailor Scout assigned. In an interview with Michael Raymond-Judy of Raven Software, he stated that this map was loosely based on the old Raven offices so Raven's Lair would be an appropriate name for it.[1]

While this is not part of a true episode, completing this level will take you to E6M2. 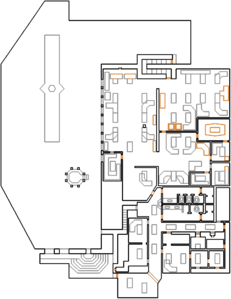 Map of E6M1
Letters in italics refer to marked spots on the map. Sector, thing, and linedef numbers in boldface are secrets which count toward the end-of-level tally.

Head straight forward (north) to an angled door and open it to find two undead warriors guarding a Hellstaff, then continue north between some green desks until you pass an iron lich and reach two wooden blocks. Turn right at this point and proceed east until you see a wooden door on your left, head through it and follow the stairs down to get outside where a pack of golems are waiting. Head west to a water pool with a Chaos Device, then south until you pass a gazebo and encounter a maulotaur. There is a doorway in the south wall containing a Silver Shield - go through here and destroy any golems waiting in the next room, then open the door in the south-east corner to enter a room with gargoyles guarding a Morph Ovum. Open the silver wall to return to the starting point and open some more rooms to the east and west; if you go through the first doorway on the left you will find some disciples of D'Sparil guarding another Hellstaff as well as the exit switch.

Walk behind the wooden blocks in the north-west corner of the office building to find some undead warriors guarding a switch. Pressing the switch will open an office on the east side containing a Ring of Invulnerability; you can also press the north side of the blocks to lower them and get an Inferno Orb and a Quiver of Ethereal Arrows.

Walk forward as the level starts and turn right at the first junction to enter a corridor with a Dragon Claw. Go through the door behind the weapon and follow the passage behind it past some gargoyles until you turn a corner, then go through the first door on your right to enter a room with golems and nitrogolems protecting a Mystic Urn. After taking the Urn, go back to where you found the Dragon Claw and you will see that a switch has been revealed; pressing it will open a room to the west containing a Map Scroll and a Phoenix Rod.