(Redirected from E6M2: The Water Shrine)

E6M2 (aka The Water Shrine or Ruined Temple) is the second of three bonus levels in the Heretic: Shadow of the Serpent Riders expansion.

This level and episode name are in fact untitled and can only be accessed via a warp command. According to the Heretic FAQ, a map creator by the name of Sailor Scout came up with the name Fate's Path for the episode name and The Water Shrine for the map name. The wHeretic source port offers this "episode" on the main menu using the names Sailor Scout assigned (although the automap shows the map title as "Water Shrine" without the leading article). In an interview with Michael Raymond-Judy of Raven Software, he stated that this map was designed at least in part by Brian Raffel and it was sort of a Ruined Temple although he did not specifically name it.[1]

Unlike the other two maps in the episode 6 slots, the design of this one is more conducive to single player, although several of the item placements make them more useful in a multiplayer situation. Only flying enemies appear on this map: disciples of D'Sparil and fire gargoyles.

While this is not part of a true episode, completing this level will take you to E6M3. 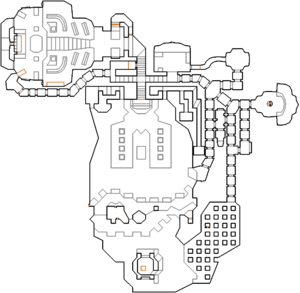 Map of E6M2
Letters in italics refer to marked spots on the map. Sector, thing, and linedef numbers in boldface are secrets which count toward the end-of-level tally.

You start out behind a small, brown stone tower with only one general direction to explore in. Check out the tower first as it has some items and ammo that will prove useful, but be careful as some ambush disciples are waiting for you on the other side. Don't worry about the raised teleport pad, it's just a shortcut that becomes active near the end of the level. Once you've stocked up, head further north into the water, where you'll have to fight against the current to continue moving forward. There are two switches here, both of which are required. The one facing you opens the temple entrance up above, while the one on the reverse side will open the teleport that you'll need to use to get up there.

On the other side of the overhang, you'll see a large raised monument and an assault force of disciples. You might want to lure them back to the start where you can fight without contending with the water currents. At the very back of this open area you'll find some dark passages, which can be explored for useful items. When you're ready to proceed, though, go back into the overhang area and find the teleport pad you opened. This will take you onto the raised monument above the water. You'll find a dragon claw here, and the way to progress which is tucked behind the mural of the chained man.

Up some stairs you will find a temple with another large group of disciples. You can get the shadowsphere in the big trident just by bumping against its platform, and the extra crossbow and inferno orb by dashing off of the raised dais. The way to progress is hidden; step on the dark area under the hanged corpse left of the trident and it will lower to a new passage.

When you follow the passage, it soon branches left or right. Collecting the torch on the left opens a hidden door back to the temple's entrance steps, going right leads you further into the level. Make sure to run at full speed to pass the open floor where this passage crosses over the entrance of the temple. Don't worry about the pillar room on your left as the only thing you can do there yet is kill the monsters. Further down the corridor there's a three-way branch but two of the passages are sealed, so take the only route forward. This will loop back to the pillar room where one of the lifts will now activate. Ride up to the top, pull the switch, and get the hellstaff and enchanted shield on your way out.

Return to the branching room, where the two blocked passageways are now unsealed. First take the rightmost passage which will lead you to an overlook of the monument area. The switch there will unseal more passages in the tunnels, so go back to the center one where you'll find that the black iron column in the room at the end of the hall has lowered to reveal another switch, which is trapped with a disciple ambush. The switch opens the final sealed passageway in the narrow shafts, which will lead you to an area made up of a grid of gray stone columns. The switch tucked on one of the columns as you head through lowers the teleport pad at the start of the map, which is just a shortcut back to the brown pillar room. At the very end of this area you reach an overlook, where you'll find the wings of wrath. Using the wings, you can now fly around in the disciple monument area, following the raised platforms to the exit switch.

Unofficially, there is a phoenix rod and some ammunition hidden in the temple area. Pulling the switch near the barrels opens the big trident behind the shadowsphere, and using the wings of wrath allows the player to fly into the passage that is revealed. Due to the positioning of the wings of wrath, this location can only be reached when the player is almost ready to exit in single player, making it more useful as a deathmatch item. The stained glass window immediately to the right when you drop down from the temple entrance stairs is also a secret passage, which opens as a door to an area sometimes containing a firemace.