This level occupies the map slot E6M3. For other maps which occupy this slot, see Category:E6M3.

E6M3 (also known by fans as American's Legacy) is the last of three bonus levels in the Heretic: Shadow of the Serpent Riders expansion. This level also appears in the original three-episode release of Heretic as E4M1. This level was originally designed and released by American McGee as a PWAD for Doom II called id Map01.

This level and episode name are in fact untitled and can only be accessed via a warp command or by use of the DeathManager! utility. According to the Heretic FAQ, a map creator by the name of Sailor Scout came up with the name Fate's Path for the episode name and American Legacy for the map name. The wHeretic source port offers this partial episode on the main menu using the names Sailor Scout assigned (although the automap shows the map title as "American's Legacy").

This level cannot be completed in single-player mode, despite being populated with monsters, as it does not contain an exit. It is intended as a deathmatch level, like IDMAP01 upon which it is based. 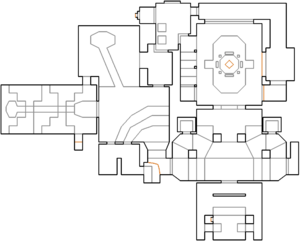 If the Firemace has appeared at the level startup, you will find it from one of three different positions. In order of appearance, they are located:

* The vertex count without the effect of node building is 442.