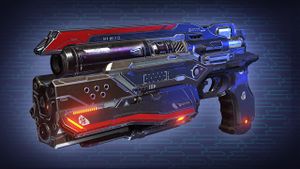 The UAC EMG Mark V pistol is an Argent energy-based weapon which occurs in the multiplayer modes of Doom (2016), and is additionally available in SnapMap. It was initially added to the game in the first DLC expansion, Unto the Evil. It is similar in terms of mechanics to the single-player EMG sidearm.

The EMG Mark V pistol is a fast firing but relatively low damage weapon. Single quick shots inflict 16 damage on a player. The weapon can also be charged for a stronger blast which inflicts 39 points of damage. Unlike the EMG sidearm, it does require ammo and has a finite supply of 50 shots at spawn. Each shot uses one ammo, regardless of whether or not it is a charged shot.

The pistol includes the text "BFP MK.3 CL" on the upper fin above its barrel. It is likely that "BFP" is short for "big fucking pistol", after the manner of BFG.