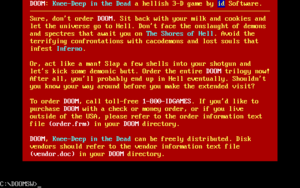 ENDOOM is the colorful screen shown when Doom exits. Note that some other ports do not show ENDOOM, as they are perceived as an annoyance in a graphical desktop environment by forcing the user to, in effect, quit twice. Some ports allow to change the setting so that this screen can be never shown, always shown, or only shown if it comes from a mod rather than the IWAD. Authors of modern WADs often do not bother to include replacement ENDOOM lumps. In Boom, the equivalent lump is known as the ENDBOOM lump; this was renamed so as to display the port's own screen instead of that from the IWAD or mod.

In Heretic, the equivalent lump is named ENDTEXT and in Strife it is ENDSTRF. Hexen does not use an ENDOOM screen and Chex Quest kept the ENDOOM name.

ENDOOM consists of 4,000 bytes representing an 80 by 25 block of text exactly as it would be stored in VGA video memory. Every character position on the screen is stored as two bytes in the resource: the first byte is simply the character's 8-bit extended ASCII value, while the second byte gives color information. This means that the line-drawing characters in the IBM PC character set may be used.

The second byte is further broken down into three pieces. Bits 0-3 give the foreground color, 4-6 give the background color, and bit 7 is a flag that tells whether the character should blink. The colors are the standard text-mode colors used by DOS. As a result of bit 7 being used to indicate blinking text, background colors are limited to the first eight (dark) colors in the following list, while the foreground may be chosen from all sixteen colors (dark and bright).