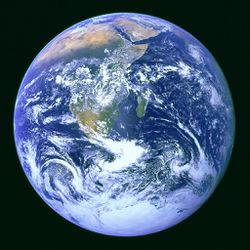 Earth as seen from space in the mid-20th century.
This article is about the location. For the 1998 Top 100 award-winner, see Earth (WAD).

Earth is the third planet in the Solar System, and homeworld of the human race. It is the primary setting for Doom II and Doom Eternal, and it is referenced heavily in Doom 3. The corporate headquarters of the Union Aerospace Corporation are located there. In all versions of the Doom canon thus far, humans have achieved proficiency in interplanetary space flight and have begun to spread out from Earth to colonize and exploit the resources of neighboring worlds and their moons. This is supported with a network of spaceports on Earth, as well as stations and platforms in orbit around it.

Earth is where most of Doom II takes place. In the game, Earth has been invaded by the forces of Hell which were sent out by the spider mastermind at the end of Doom, and most of its population has been destroyed. The player battles the demonic forces there in order to allow the survivors to escape the ruined planet via space ship. As on the Martian moons of Phobos and Deimos, portions of the Earth begin to resemble Hell to a greater degree as one progresses toward the source of the corruption. Though the marine at one point passes what seems to be a portal to Hell, the areas on the other side still resemble Earthly locations that have been subsumed into the other reality. At the end of the game, the invasion is defeated, and the survivors can presumably resettle and start rebuilding the planet.

In the Final Doom mission The Plutonia Experiment, remnants of the UAC are reorganized by the government with the aim of carrying out research toward preventing another such catastrophic supernatural invasion. As part of this, gateway technology is first relearned, and a prototype device which can close the gates known as the quantum accelerator device is then developed. While initial tests prove successful, a massive attack from the other side manages to overwhelm the defenses setup around the experimental gateways, leaving Earth vulnerable once again and the prototype QAD stolen by the demons, leading to fears it would be used in some horrific fashion against humanity. The marine is again called into action to reclaim the QAD and stop the demons.

In the No Rest for the Living expansion, taking place immediately after Doom II, a surviving cyberdemon lord has setup his own "personal amusement park" on Earth, leading a large number of surviving demons to attack the Earth Base and neighboring facilities. As part of his reconstruction efforts, the marine must make his way to the cyberdemon by cutting through his Hellish hordes and destroy him.

In Doom 3, Earth is never seen in the game itself, but it is mentioned multiple times as being the center of human civilization, as well as being the ultimate target of Dr. Betruger and the demonic forces. It is hinted that the ancient Martians may have fled to Earth after their devastating war with Hell, and that humans may be their descendants. It is also mentioned that at some point in the past, the demons had dominion over the Earth, but were defeated and driven into Hell, hence their desire to return and retake the planet.

The player arrives at Mars aboard the interplanetary dropship Darkstar after departing a spaceport at Burns Flat, Oklahoma, three months prior, along with UAC attorney Elliot Swann and his bodyguard Jack Campbell, who were sent to investigate Betruger's activity after prominent UAC scientist Dr. Elizabeth McNeil blew the whistle on his suspicious teleportation research program. A devastating invasion of the Mars base follows mere minutes later.

Various PDAs throughout the game contain emails from employees to or from their family and friends back on Earth. Interplanetary marketing company Martian Buddy frequently transfers goods there from Earth. A form of subspace communication technology is referenced in a news broadcast which apparently allows faster-than-light communication between the two planets.

Technologies researched in the Alpha Labs, such as the Hydrocon, are not only meant for the benefit of the Martian colony, but for eventual applications on Earth as well.

In Doom Eternal, Hell invades Earth in the year 2151, starting from a UAC facility turned cultist outpost in Central Europe. The cities of Earth have been devastated and are entirely devoid of human life; the landscape is being destroyed by flows of lava pouring in from strange demonic devices as well as being terraformed by Hellgrowth, a cancerous organic mass hostile to all other life. The destruction left by the demons also creates vast occult patterns that are visible from outer space, and the Moon itself had been shattered. At the locus of the invasion the demons erected the Super Gore Nest. According to VEGA, the planet has reached 67% demonic possession by the beginning of the campaign. A news broadcast intercepted by the Doom Slayer describes casualties ranging in the billions; the majority of Earth's human population was killed in the first month of the invasion, but large starships have transported several hundred thousand into orbit. Samuel Hayden formed the Armored Response Coalition in order to fight back against the demons, but they suffered heavy losses.

The Slayer finds two of the Hell priests on Earth - Deag Nilox in a Hell barge being carried through New York City, and Deag Ranak in an Arctic base being used to produce Doom hunters. Later, he travels to the ARC Complex to retrieve Samuel Hayden. Finally, the Slayer uses a large portal in Urdak to return to Earth after the Icon of Sin is unleashed and confronts the Titan on a ruined skyscraper. Following the Icon's defeat, the majority of the demons retreat along with much of the Hellgrowth, although scattered resistance continues.

The Ancient Gods, Part One includes two locations set in Earth's oceans. The UAC Atlantica Facility is an environmental and climate research facility that secretly conceals the body of Samur Maykr, while the ARC Carrier is a mobile base of operations that allows the Slayer to travel between different locations.

Part Two sees the Slayer travel to an abandoned Earth city in search of the Gate of Divum, an ancient transportation device. The buildings contain numerous messages supporting the Slayer, who comes to be viewed as a savior or demigod by many humans following his victory over the demons.