An Easter egg is a message that is hidden or otherwise not immediately evident and is meant to amuse players and often used by the designers to refer to influences, development jokes, pet characters, previous works, or preferences. 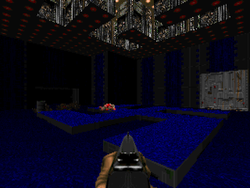 In released versions of Doom prior to v1.4, E1M4: Command Control contained a swastika design on the floor of one room, meant as an homage to Wolfenstein 3D. Alpha versions of this level, dated April 2 and May 22, 1993, included the same room, but did not have the swastika design. [1] The swastika was removed in v1.4 of Doom. While the presence of a swastika would have caused Doom to be banned in Germany (where the display of Nazi iconography in video games was illegal, regardless of context), and not just restricted to adults due to the game's graphic violence, according to developer John Romero, the symbol was removed after an objection to its presence was sent to him by a veteran of World War II.[1]

Most of the cheat codes in Doom contain or otherwise trigger easter eggs as part of their name or function: 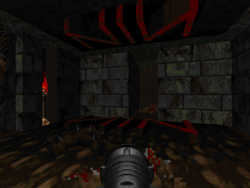 E4M1: Hell Beneath includes the letters "NIИ" in a secret area of the level, a reference to Nine Inch Nails, the American industrial rock band.[2] This was included by designer American McGee, who was a fan of the band. id Software's next game, Quake, would feature sound and music by the band's frontman, Trent Reznor. Additionally, ammunition for the nail-gun and super nail-gun (a crate of nails) would be inscribed with "NIИ" on each of its faces. The easter egg is notably absent from the version of the level used by the Sony PlayStation and Sega Saturn ports.

In MAP30: Icon of Sin, after the player teleports into the huge room with the head of the final boss, a strange, unintelligible noise is played. This is stored in the Doom2 wad file as DSBOSSIT, and if reversed it becomes a voice saying "To win the game, you must kill me, John Romero". The voice is shifted down in pitch and is that of John Romero himself.

In the same level, John Romero's severed head on a stick features as the main boss creature, although the head is hidden behind the face of the final boss, and can only be approached with the noclip cheat. The player must indeed kill it in order to win the game.

The secret maps, MAP31: Wolfenstein and MAP32: Grosse, resemble E1L1 and E1L9 from Wolfenstein 3D. Both levels include Wolfenstein textures and SS Nazis that attack the player. In MAP31, SS Nazis take the place of soldiers and Demons are found in place of the dogs.

A Cyberdemon is in the place of Hans Grösse in MAP32; the name of this map also comes from Hans Grösse's name.

In the last room in MAP32 there are four Commander Keens hanging on ropes. They must be killed in order to exit the level.

In the text screen before MAP32, the message "You'd better blaze through this one!" is displayed; Billy Blaze is Commander Keen's real name.

In the Doom II expansion No Rest for the Living, first released as part of the XBLA version in 2010, the first map contains a secret message "THE CASTLE WAS HERE" which is almost impossible to find under normal circumstances, as it becomes invisible 30 seconds after the beginning of the level. Directions on how to find it can be found here. It is a reference to the map's author, Russell Meakim (TheCastle).

Two of the wall textures in Team TNT's TNT: Evilution, CR64HBRM and METAL-RM, have large blood stains which spell the name "Romero", a reference to John Romero.

There is a hidden room in MAP17: Processing Area next to the room containing the blue key that can only be accessed by using the noclip cheat. Several Demons are inside and will teleport out once the key is collected. In this room the player can see "Tom" and "NIИ" in large, glowing blue letters on the north and south walls respectively.

In the Super NES port of the game, at the bottom of the Knee-Deep in the Dead sky texture is a message reading, "Randy Linden ♥ Jodi Harvey." This can only be seen if the player looks inside the ROM's graphical resources, or uses a Pro Action Replay code that allows walking through walls in areas where the sky is visible.

Within the ROM itself, a hidden message can be found which reads, "Rage/Reality Engine written by Randy Linden. Special thanks to my loving wife, Jodi Harvey." It can only be found if the ROM file is opened in a hex editor, and is found at position 10E (270 in decimal).

Several oddities in the Sony PlayStation port of Doom are actually easter eggs, left by the Williams designers:

In Doom 64, if a player dies and waits several seconds, messages will start to appear at the top of the screen every once in a while, usually taunting the player (e.g. "HAHAHAHAHAHAH!!!!", "LOOK AT THOSE DEMON FEET!", etc.).

Heretic: Shadow of the Serpent Riders[edit]

Attempting to use some of the cheat codes from Doom and Doom II in Heretic has negative effects on the player:

Hexen: Deathkings of the Dark Citadel[edit]

Strife: Quest for the Sigil[edit]

There is a sound wave in VOICES.WAD named SUR4A1 that sounds like a bunch of people yelling "surprise!!".

Chex Quest contains many levels leftover from the original 3-episode Doom albeit trimming to 5 levels.

The texture CEMPOIS has a blackboard and in the bottom right-hand corner of said board, is the equation: √2 = chuck. Charles Jacobi was the Art Director/Lead Artist for Chex Quest.

A secret room in E1M2 contains pictures of all the people that worked on Chex Quest.

In Chex Quest 2, E1M1 is titled HHH International Spaceport. This is a reference to the HHH (Hubert H. Humphrey) Metrodome in Minneapolis, Minnesota where the Vikings formerly played until December 29, 2013 (it has since been demolished).

From a nonfunctional computer in the Delta Complex the player may download an email, apparently sent to demons, giving tips for successful sacrificial rituals.

The last level contains the id PDA which contains special messages from the developers of the game. Immediately before entering the room with the Cyberdemon, there is a button marked with the id Software logo. Pressing this opens a door to a secret room containing the PDA. 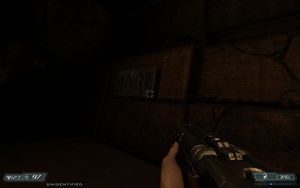 In Doom 3: BFG Edition's expansion The Lost Mission, the final area of the Hell Outpost level just before the boss arena contains an Easter egg which refers to Rage, id Software's previously released title. It consists of a button with the game's logo emblazoned on it which can be pressed in order to reveal a secret cache of weapons, health, and armor. 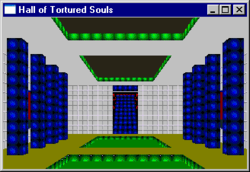 In Microsoft's Excel 95 spreadsheet program (included in the Microsoft Office 95 office suite), there is an Easter egg known as the Hall of Tortured Souls, a three dimensional raycasting game engine created as a homage to Doom.[2] The existence of this Easter egg is one of the results of the "religion" said to have arisen on the Microsoft campus in the wake of Doom's release.[3] Part of the Hall is blocked off by a wall, and the wall can be opened by typing "xlkfa", a reference to the "idkfa" cheat code. It features the names and pictures of the Microsoft development team.

In Pitfall: The Mayan Adventure, typing iddqd or idkfa shows a picture of the Pitfall staff.

At a certain point of the official video of the Doom Original Soundtrack, at 1 hour, 6 minutes and 6 seconds at the near end of Transistor Fist track, a revenant holding a trumpet will appear, flying upwards and then disappear while spinning. It is a reference of a meme associated with the Revenant photo-shopped with a trumpet as seen in this video as an example, often called DOOT and later became a running gag for Bethesda Softworks. The duration of this is also a reference to the Number of the Beast, 666.

In the Kadingir Sanctum level, a skeleton wearing the iconic "Dragonborn helmet" from Skyrim (as well as an arrow in the knee) can be found in a small cave, behind a stone column. 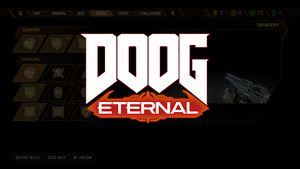 Doog Eternal as it appears in Doom Eternal.

In the official gameplay reveal in Quakecon 2018 and the gameplay reveal in E3 2019 one of the glory kills that can be performed on an Unwilling is smashing its head into its torso, and causing a squeak noise to play. This is always the first glory kill in the game (albeit taking place in the Hell on Earth level instead of the Super Gore Nest level)

As a similar nod to the DOOT meme above, one of the invading Revenant's player with the name D00t76 can be seen in the same reveal. The 76 on the tag may refer to Fallout 76, Bethesda Softworks' previously upcoming title of the Fallout series.

In the Cultist Base level, there are 3 Dopefish hidden across the level: one hanging on a rope, like it was caught, another stuck in ice (disappears when ice is smashed), the last on an hidden altar.

Daisy, the Doomguy's pet rabbit, can be found in numerous locations, often hidden and usually out of sight.

A reference to the Japanese Hololive V-Tuber Inugami Korone can be found by accessing the Runes tab in the Dossier during gameplay, and then pressing the dedicated Chainsaw button four times. A chainsaw rev could be heard, before the Doom Eternal logo modified to spell Doog Eternal instead pops up for a few seconds. A video of it being performed can be seen here. This easter egg is added during the release of The Ancient Gods, Part One DLC. A few days later it was removed in patch 3.1.

The Fortress of Doom contains numerous easter eggs within the Doom Slayer's personal room, many of which containing materials from earlier Doom games as well as related first person shooter games and classic literature.

"Atlas Ripped and Teared" - A play on "Atlas Shrugged"

"Ten Dollars Left to Spend, An Inspirational Tale by Ugoh Tamirn - An anagram of Hugo Martin

"The Ripping Tree" - A play on "The Giving Tree"

"Slayenstein" - A play on either Frankenstein or Wolfenstein

"how to comb your mustache" - A tribute to Mark Fischbach's late father, Cliffton M. Fischbach.

"Vault Dweller's Survival Guide: Preparing Yourself and Your Loved Ones For the Inevitable Nuclear Apocalypse" - A reference to the Fallout game series

"From Nopefish to Dopefish: The Dope Tale" - A reference to Dopefish, an enemy from Commmander Keen.

"RET-CONNED: The Life and Times of Flynn Taggart" Doomguy's name in the Doom novels

"The Strogg: A Transdimensional Field Study" - A reference to the main antagonists of Quake 2 and 4

"Living with Rage: and Other Common Emotions in the Apocalyptic Wasteland." - A reference to the Rage game series

"Liandri: A Brief History of Interplanetary Industry" - A reference to the Unreal game series

"Why I'm So Great Pt. II by Dork Norkem" - A reference to the Duke Nukem game series

"My Buddy Superfly by Hiro Miyamoto" - A reference to Daikatana