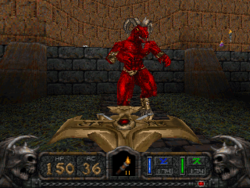 Eidolon is roused to battle.

Eidolon is the eldest and most powerful of the three Serpent Rider demons from the Heretic and Hexen series of games. He is the final boss of Hexen II.

During the epilogue of Hexen, after the player character has obtained the Chaos Sphere, it is remarked that greater players than Korax remain in the cosmic game of power, and that none can know their next moves. In the final frame of the ending slideshow, a large red demonic hand is shown to be removing a figurine of Korax from a chessboard, as though the piece has been captured. After being reminded about this scene during the development of Hexen II, Raven Software claimed to make adjustments to the design of Eidolon in order to match this ending. This was the subject of an infamous hoax by Raven, which saw them release information—later revealed to be entirely fabricated—claiming that their original plan for Eidolon had consisted of a giant snail.

In Hexen II, Eidolon's full form is revealed to be that of a classic red devil, with curling goat horns and large hooves, reminiscent of the baron of Hell and the Heresiarch. After invading the world of Thyrion and conquering the four continents with an army of creatures led by his dark generals, the Four Horsemen of the Apocalypse, he set up a large and foreboding castle in the area of Blackmarsh. There he practiced the dark arts with great skill, chief amongst his feats being the creation of the Demoness, a minion with whom he intended to eventually spawn an entire new race of demonic beings which would displace humanity.

In battle, Eidolon attacks with homing electric orbs and has a powerful melee attack which launches the player into the air and far away from him. Once he has taken his full HP in damage, he summons the Chaos Sphere into battle. Using its power, he restores his health, grows to an enormous size, gains invulnerability, and obtains a new set of attacks, including extremely fast fireballs which can instantly kill the player, deadly lightning bolts, and ability to breathe a devastating stream of flame much like a dragon. Eidolon's invulnerability can only be removed by destroying the Chaos Sphere.

Once defeated, Eidolon shrinks back to his normal size, and his body bursts apart in an explosion of gore and brilliant light.

In the Portal of Praevus expansion, Eidolon's Demoness minion is revealed as a new fifth player class. More of Eidolon's castle in Blackmarsh can be explored, including his massive throne room. The villainous sorcerer Praevus intends to harvest the souls of all three Serpent Riders for his own means. The Demoness, in opposition, intends to reclaim her master's soul in hopes of resurrecting him and the other Riders. In the end, the Riders' souls appear to escape, leaving Eidolon's true final fate open to question.