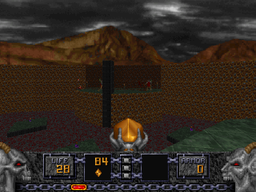 The Elven Wand is the basic ranged weapon in Heretic. It uses Wand Crystals to fire weak hitscan shots at a medium rate. The shots deal 7-14 damage. When firing in quick succession, the first shot is always perfectly accurate. When enhanced by a Tome of Power, it fires a spread of five hitscan shots as well as a pair of projectile fireballs, each of which do 1-8 damage, for a total of 7-56 damage if everything hits. This weapon is always effective on ghosts. Maximum capacity is 100 shots, or 200 with the Bag of Holding.

The Elven Wand, like the Dragon Claw, is ideal for sniping enemies from afar, though on average its shots are a bit less damaging than the claw. Unlike the pistol in Doom, it will not take away ammo that could be used with the claw. With unlimited range and hitscan shots, the Elven Wand provides good damage at long ranges without the player having to face monsters in medium to close combat. To use it in the optimal way, the player must shoot with quick pauses between shots to enable "perfect aim". This way the Elven Wand will act as a sniper rifle, making it suitable for taking out medium-weak monsters far from the player. It is also possible to fire the hitscan through solid decorations that would block projectiles, allowing attack from behind cover. The weapon is also good for finishing off chickens and damaged monsters without wasting precious ammunition from stronger weapons like the Phoenix Rod.

The Elven Wand is also handy for conserving ammo when facing melee enemies where there is space to maneuver. Since it is fully capable of hitting ghosts, it can also be worth switching to over the Ethereal Crossbow when facing them, if a Dragon Claw or Hellstaff is not available.

Unlike many of Heretic's weapons, the wand does not become particularly niche in its usage when under the effect of a Tome of Power, though the spreadshot is most effective at closer range causing it to lose some of its sniping utility. This mode is good at eliminating ghosts and also serves as a decent general purpose attack while powered up when other weapons would not be suitable, making good use of excess wand crystals.