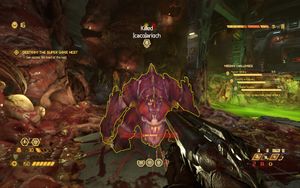 An empowered pinky, prior to Update 2. 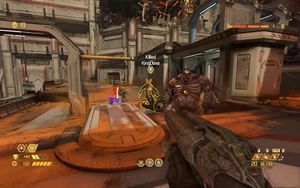 An empowered whiplash, prior to Update 2.

Empowered demons are a game play mechanic which first appears in Doom Eternal, initially demonstrated in the game's pre-release promotions, and eventually enabled for the public as part of Update 1. Slightly stronger versions of the ordinary demons, they can appear in most of the game's levels as a dynamic element, and drop greater rewards when killed. Empowered demons occur much more frequently in the levels of The Ancient Gods, Part One.

An empowered demon can appear at random during single-player campaign play, selected from among the normal demons spawning in a given arena, though the process does not seem to be entirely random, and certain demons seem to receive the upgraded status more often than others. When a demon has become empowered, it will glow with a yellow highlight and outline, and as of Update 2, "Empowered <species>" text (such as "Empowered Pinky", for example) will appear above its head as part of an indicator which is visible even through walls and other objects. Prior to Update 2, the text indicated the name of a previous player who had been killed by the empowered demon, and players on the current player's friends list were selected preferentially over others.

Empowered demons never spawn in Hell on Earth, probably to avoid an overly challenging situation for new players with the heavily restricted gear available on that level.

The empowered demon mechanic is optional and can be toggled on or off via the game options menu.