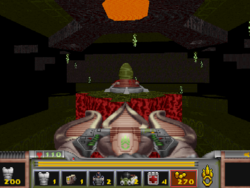 The Entity's egg, from which it will hatch. 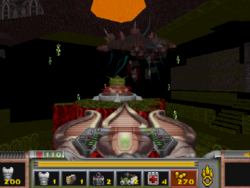 The fearsome 'One God' of the Sigil, the Entity. 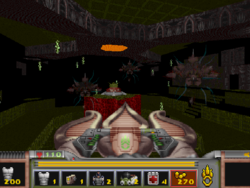 The final leg of the fight, against the Sub Entities. 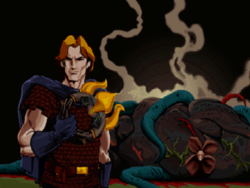 The Entity's dead body in its lair.

The Entity, also known as "The One God," "The True God," and sometimes dubbed "The Evil," is the final boss of Strife. It is a mysterious creature from outer space. It resembles the spectres, but it is larger and green. There is one main entity which, when slain, splits into three smaller sub entities.

The Entity is the malicious god mentioned in the Strife storyline. After the comet struck the planet and spread a deadly virus, many of the survivors started to hear its voice in their heads and began to worship it and the sentient weapon which serves as its seal. The Entity presumably controls all the spectres as well as the Order.

The Entity is found in the last map, the Entity's Lair, which is part of the alien ship. After the player enters the last room, a green pod in the middle of the room will split open and release the Entity after a short time. After the Entity and its sub-entities are destroyed, the game ends and you win. If the player is killed by any of the entities, he will see a cinematic depicting the doom of the world.

The main entity can fire all five forms of the Sigil. The sub-entities fire straight bursts of the same projectiles as the fifth form of the Sigil launches sideways. They are called Sigil E Offshoots, and in this picture, they are the long bolts to both the left and right.

The door to the Entity's lair cannot be opened until all five pieces of the Sigil have been obtained.