Entrance is the first level of Doom RPG.

Entrance serves as an introduction for new players. The player starts with only a pistol, but during the course of this level obtains the Fire extinguisher and Fire axe. Scientists around the map explain the basics of playing Doom RPG, including the controls.

The main objective of the level is to obtain the yellow key, allowing the player to proceed to Junction. Once exiting this level, it is impossible to return back to it again. 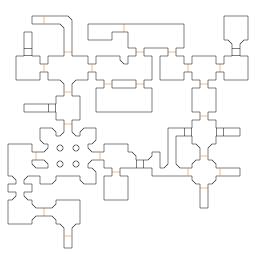 One of the secret rooms includes a flak jacket and a computer. If the computer is activated, the player gets an email from B.J Blazkowicz (Wolfenstein 3D hero) saying that a shotgun is hidden in a cache behind the fire axe.

There is a locked door and a computer on the left side of the level. When the computer is activated for the first time it reboots. Upon the second activation it logs in and on third time it ask you the date of the first release of Doom (version 1.0). The correct date is 1993. Upon entering it, the doors open to a room with a bunch of items (10 credits, 10 shells and a flak jacket).