Entropy is a single-level PWAD for Doom II using a Boom compatible source port that was released in May 2019. It was designed by Nirvana, uses custom music by Zachary Stephens (Ribbiks), and sports a title screen by Insane_Gazebo.

The PWAD actually contains a small bonus map, but with little (re)playability. At the Cacowards 2019 ceremony, Entropy was chosen as one of the runners-up. 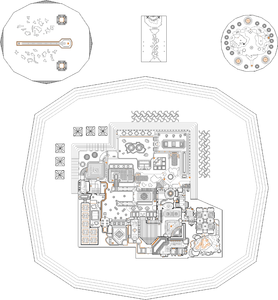 Map of Entropy
Letters in italics refer to marked spots on the map. Sector, thing, and linedef numbers in boldface are secrets which count toward the end-of-level tally.

* The vertex count without the effect of node building is 38709.