Entry is a single-level PWAD for Doom that was designed by Josie Austin and released in 1996. 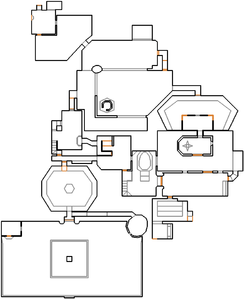 Map of Entry
Letters in italics refer to marked spots on the map. Sector numbers in boldface are secrets which count toward the end-of-level tally.

The release includes a separate demo file, ENTRY.LMP, by Ben Sloat. It requires Doom v1.9 to be viewed and runs for 3:42.46 (7786 tics), showing off the level on Hurt Me Plenty.