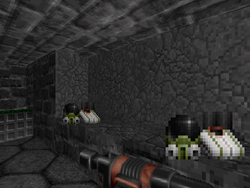 To cross hazardous areas, environmental suits such as these two from MAP06: Sewers will be useful.

The environmental suit is an item from Strife that protects the user from toxic water and radiation, and gives total immunity to players' and crusaders' flamethrowers, for 80 seconds. When exposed to toxic water or radiation for more than 30 seconds, the player begins taking damage (which can be reduced by armor) directly proportional to the exposure time beyond the initial 30 seconds. Using an environmental suit prevents this damage from beginning or accumulating further, but it will not prevent any exposure damage that has already been accumulated.

Poison exposure and radiation are indicated by a flashing green tint on the screen. Once 30 seconds have passed, the screen stops flashing and it becomes solid green as damage begins to be taken. Damage will cease when the screen starts to flash green again.

Up to five environmental suits can be held in the player's inventory. The armorer in the town sells these for 25 gold per unit.

In the IWAD the environmental suit is first encountered on these maps per skill level:

The IWAD contains the following numbers of environmental suits per skill level: