An episode is a set of nine levels in Doom (and off-shoots, such as Heretic) which can be played sequentially from start to finish. Each of the three episodes (or more, in the expanded retail versions of the games) is played separately: the player must start each episode with a pistol, 50 bullets, and normal health for his/her character.

The nine-level episode structure of the games was a convenient way to market them as shareware, and id Software had been using the format for products preceding Doom; notably the Commander Keen series and Wolfenstein 3-D. It allowed the company to provide a full multi-level episode to users, free-of-charge (or for a small vendor-set fee), as a generous sample of the whole game, and as an incentive to register the product for additional level sets. 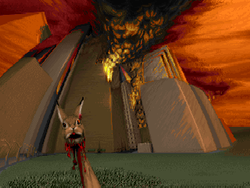 Each episode in the game has a distinctive intermission screen. In Doom each is an overview of the area the protagonist travels through, showing the outer structure or building of each of the levels to be played on different locations of the landscape. In addition, a text screen with a distinctive flat as a background is shown at the end of the episode, instead of the intermission screen. That text screen is followed by a full screen picture.

Completing the first episode (Knee-Deep in the Dead), the shareware notice screen is shown. After The Shores of Hell is completed, a picture of Deimos floating above hell is displayed, depicting what has been described on the preceding text screen.

At the end of Inferno, the game shows a scrolling picture that begins with a peaceful view of a field on Earth with a rabbit in the foreground, and pans left to show a ruined city with another rabbit's head impaled on a spike. The words "The End" appear and are riddled with bullets. The accompanying music starts out with a happy little pastorale tune which turns into a disturbing mockery of itself in the parallel minor key as the ruined city and impaled rabbit head scrolls into view, ending with a mournful twelve-bar blues.

The additional episode provided with The Ultimate Doom, Thy Flesh Consumed, shows the ruined city shown in the scrolling screen for the third episode, but now the blood-spattered marine appears in the foreground, holding his murdered pet's head by the ears.

Id Software did not give Doom II episode structure like in Doom because the game was meant exclusively as a product for retail stores. Thus, not needing to split the game up they decided to produce a single longer set of (32) levels that can be played from start to finish, instead of a few smaller sets. Nonetheless, the longer set still shares some of the characteristics of the episodes. Like Doom, Doom II includes three sections; each with its own sky and marked at the end by a text screen showing part of the story. As a result of the similarities, fans sometimes call the sections in Doom II "episodes", especially speedrunners roughly recording those sections, and levels designers producing sets that replace them.