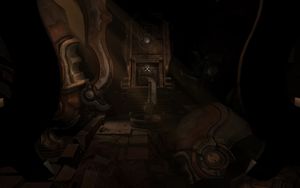 The Erebus Facility was a largely subterranean UAC Mars base built within caverns which became known as Site 1. It was one of the earliest facilities constructed on Mars, with architecture similar to Site 3, but fell into disuse after Phobos Labs and the rest of Mars City made it obsolete. Some use of the facilities as a way point continued however, due to the discovery in 2115 of ancient Martian civilization ruins within the caverns. Research of these ruins continued up until November 15, 2145, when the site was abruptly declared closed and the remaining discovered artifacts cleared out. The facility was brought back online two years later and used by Elizabeth McNeil's team as a base of operations during the events of Doom 3: Resurrection of Evil.

Two years after the Mars City disaster in Doom 3, which the UAC claimed was due to a system malfunction, an unexpected signal was detected originating from Site 1. The UAC sent Dr. Elizabeth McNeil, a member of Dr. Malcolm Betruger's research team who originally blew the whistle on his suspicious activities, along with a large team of other researchers, workers, and security personnel in order to investigate and attempt to re-establish operations on Mars.

Dr. McNeil's research focused on Site 1 and was conducted within the Erebus Facility and the nearby Phobos Labs. Tablets discovered in this area gave tantalizing hints, but the bulk of the information on them was encrypted, their secrets locked within a small tablet known as the Primitive. Before Dr. McNeil and her associates could reach a full understanding of the tablets, however, one of her expeditionary Marine forces stumbled upon a hidden chamber in the ruins where they found the Artifact, also known as the Heart of Hell. It had been locked away within a special containment field long ago by the ancient civilization, due to its potential for creating a portal to Hell. When the combat engineer Marine touched it, a gateway was activated and the Erebus Facility suffered the same fate as Mars City. Within a matter of minutes, the facility was wrecked and most of its personnel were killed or zombified.

Levels in the Erebus Complex[edit]