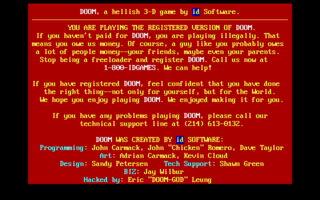 Eric Yick Leung, also known as Pook Gai (a Cantonese swear word), was a deathmatch tournament player and student at the University of British Columbia, noted for taking credit for releasing an unofficial v1.6 patch for the registered version of Doom. A self-proclaimed "King of DOOM" and "DOOM-GOD", Eric challenged John Romero to a deathmatch on Usenet. Among other boastful claims, he stated that he practiced "12 hours a day", taking "wake up pills" in order to keep playing.