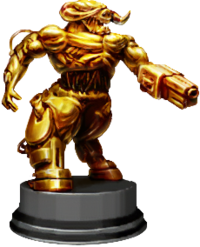 Esa "Espi" Repo (November 12, 1981 - August 29, 2009) was a Finnish Doom level designer, artist, and speedrunner. He is best known for Suspended in Dusk and Back to Basics, as well as MAP27 of TeamTNT's Eternal Doom IV: Return from Oblivion. Espi was known for his sleek, minimalist level design, as well as for his attention to detail, with the term "material texturing" coined to describe how he treated textures as actual building materials when designing levels.[1][2]

Espi passed away in his sleep in August 2009 due to cancer.[3] At the 20th Annual Cacowards, a new category was named the "Espi award," in his honour.

The following data was last verified in its entirety on July 17, 2020.