Escape From Deimos (named UAC Base on the intermission screen) is a single-level PWAD for Doom II. It was designed by Chris Christenson and Nicol Jarvie and released in 1997. It was preceded by Escape From Phobos and followed by Escape From Natas. 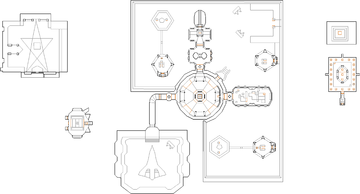 Map of Escape From Deimos
Letters in italics refer to marked spots on the map. Sector, thing, and linedef numbers in boldface are secrets which count toward the end-of-level tally.

Several multiplayer items, namely four super shotguns (Things 277 through 280), three boxes of shotgun shells (281 through 283), four rocket launchers (285 through 288), a plasma gun (289), and an energy cell pack (290), have no flags set for any of the three difficulty classes, so they do not actually appear in the level.

* The vertex count without the effect of node building is 2198.