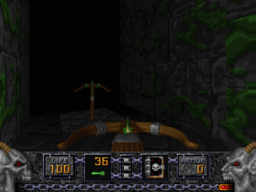 The Ethereal Crossbow is a weapon from Heretic. It is a stringless wooden crossbow that fires glowing green bolts (Ethereal Arrows) for ammunition. When fired, it launches a spread of three bolts, the central one dealing 10-80 damage and the other two dealing 2-16, for a total of 14-112 damage. The bolt in the centre can damage ghost monsters, but the ones on the sides cannot. These small side bolts are also affected by wind. All three bolts auto-aim separately, making the weapon more accurate when pointed at an enemy at midrange than when firing at a wall or at long range.

Under the influence of a Tome of Power, its rate of fire is slightly faster, and it fires a spread of five bolts, the central three of which are capable of damaging ghosts. The center three deal 6-48 damage each, and the ones at the sides do 2-16 damage, for a total of 22-176 damage. Maximum capacity is 50 shots, or 100 with the Bag of Holding.

The weapon is already available on the first level of the game, E1M1: The Docks, although it is hidden in a secret room there. However, the crossbow can be found in non-secret areas on each subsequent level of the episode.

The crossbow delivers medium to high damage against all non-ghost enemies at medium-close combat. It is also effective at longer ranges, but not as much as other weapons such as the Dragon Claw and the Hellstaff. A full impact from the Ethereal Crossbow also deals some knockback momentum, which allows the player to throw enemies back out of melee range, especially when dealing with creatures who have low mass such as gargoyles, golems and sabreclaws.

Because the side bolts pass through ghosts and are pushed by wind, the unpowered crossbow is noticeably less effective in these situations. When powered up, these effects are mitigated, though not altogether eliminated, making the weapon reasonably effective even under those conditions. Unlike many of Heretic's weapons, the crossbow does not take on a niche use when powered, instead merely improving on its normal function. This makes it a suitable all-purpose fallback when a Tome is active.

In the IWADs the Ethereal Crossbow is first encountered on these maps per skill level:

The IWADs contain the following numbers of Ethereal Crossbows per skill level: