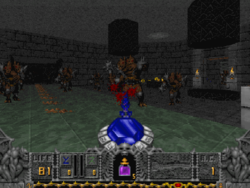 The player is being mobbed by a wave of ettins on the Dark Crucible. 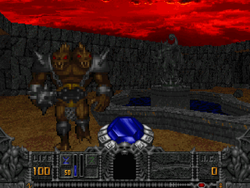 An ettin approaches in a pre-release screenshot.

Ettins are monsters from Hexen. They are large, two-headed humanoids outfitted with armor and maces, but are essentially the lowest tier of monster and very straightforward to kill. With 175 hit points, they are effectively meat shields for some of the more dangerous adversaries. Ettins are also the most common enemy in the game, and the first encountered.

"These horrid creatures are all that remains of the once proud Legionnaires. Less than human, they retain just enough of their memory to hate what they have become, and to hate you even more for what you still are. Fortunately for you, though, they are not particularly skillful foes."
― Hexen instruction manual

Although ettins have more hit points than afrits, reivers, wendigos and dark bishops, they are overall weaker enemies as they move and attack slowly, cannot fly and lack a ranged attack. At melee range they will strike with their maces; however, these only cause a small amount of damage and are easily dodged by the player. The ettin's reach is shorter than any of the player's melee weapons (Mace of Contrition, Timon's Axe, Spiked Gauntlets) so with practice one can dispatch them in hand-to-hand combat without taking hits. However, ettins can be dangerous in groups, especially if you get surrounded.

If the game is set to skill 5 or loaded with the -fast parameter, both the movement and attack speed of ettins will be increased.

Ettins gib when they take too much damage or get killed by the Quietus, Wraithverge, or Bloodscourge weapons.

In the IWADs the ettin is first encountered on these maps per skill level:

The IWADs contain the following numbers of ettins per skill level: