Europa 3 - The Dark Side of Vrack

Europa 3 - The Dark Side of Vrack is a single-level PWAD for Doom II and a Boom-compatible source port that was released in March 2003. It was designed by Erik Alm as the third map in his Europa mini-series and uses the music track "Lower Norfair Theme" from Super Metroid. 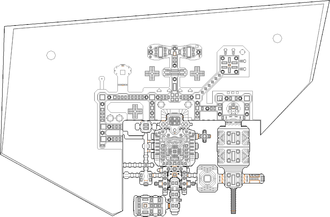 Map of Europa 3 - The Dark Side of Vrack
Letters in italics refer to marked spots on the map. Sector numbers in boldface are secrets which count toward the end-of-level tally.

* The vertex count without the effect of node building is 12644.