Europe is a single-level PWAD for Doom II, meant for limit-removing source ports that was released on September 25, 2005. It was created by DooMknight and uses a MIDI rendition of the music track "Burn" by Deep Purple, but this and the custom sky texture are only utilized in a ZDoom-based port as they are activated through MAPINFO.

Europe is a very large map, with well over a thousand monsters, that tries to emulate realistic locations such as a city, a castle, a subway system and more, all built exclusively with vanilla textures. DooMknight would follow Europe up with two other very large maps, 2013's Vanilla Sky and 2018's UAC Invasion: The Supply Depot, the latter of which won a Cacoward in 2018. 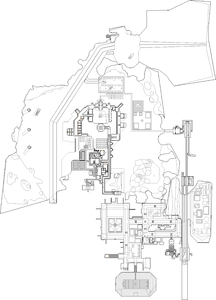 Map of Europe
Letters in italics refer to marked spots on the map. Sector, thing, and linedef numbers in boldface are secrets which count toward the end-of-level tally.

The (absence of) data was last verified in its entirety on November 28, 2021.

* The vertex count without the effect of node building is 16404.