Exquisite Corpse is a single level PWAD for Doom II. It was produced by Andrew Stine (Linguica) and consists of 12 1024x1024 unit regions joined together into a rectangle, with each of the 12 regions designed by a different author. The "gimmick" of the level is that after the first author, each successive author only got a tiny sliver of the directly adjoining regions to their own, and had to design their own region with a faint idea of what the regions next to theirs looked and played like. 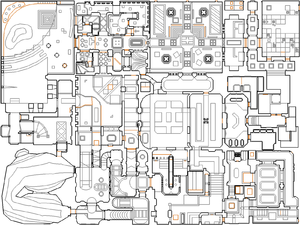 Map of Exquisite Corpse
Letters in italics refer to marked spots on the map. Sector numbers in boldface are secrets which count toward the end-of-level tally.

* The vertex count without the effect of node building is 6968.

Exquisite Corpse draws its name from an surrealist parlor game where players would write sentences by having each person add a new word to the sentence without being able to see the words that came before. In September 2004, Linguica created a Doomworld forums thread entitled "Exquisite corpse" community WAD seeking to create a PWAD following the same principle. He quickly recruited 11 level designers and after creating the first 1024x1024 region, sent the authors for the 2 adjacent regions 64x1024 slivers of his own region for them to connect their own regions to. Then he sent slivers of those regions to the next authors, and so forth.

To make sure the level was at least somewhat playable, Linguica also gave each contributor a general sense of the player's expected weapon loadout, and tasked certain contributors to add colored keys or colored key doors in turn.

Exquisite Corpse is credited as the "main influence" in the 2005 megawad Congestion 1024, and can thus be argued to be the originator of the restricted-space genre of maps, also found in Claustrophobia 1024, Congestion 64, MAYhem 2048, 2048 Unleashed, and others.