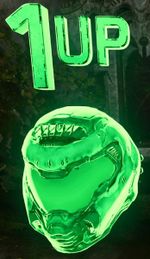 The extra life is a power-up which is introduced in Doom Eternal.

Extra lives are marked on the automap as Doom Slayer helmet icons; in game, they take the form of a helmet with "1UP" displayed above it. Unlike most major collectibles, they respawn when replaying a mission.

Doom Eternal includes an Extra Life Mode that can be applied to any skill level except Ultra-Nightmare; in this mode, running out of lives will end the campaign, forcing the player to restart from the beginning. Extra lives do not appear in Ultra-Nightmare at all; they are either removed entirely or replaced with spirit armor.

A cheat code that grants unlimited extra lives can be found in the Hell on Earth level. It is still possible to earn extra lives for the current save file when using this cheat even though the counter is not visible (replaced with an infinity symbol), making it a good way to accumulate lives.

Part One introduces a rare 2UP collectible, which adds two extra lives instead of one. It also includes a support rune called Take Back - when active, if an extra life is consumed then the player can get that life back by quickly killing the monster that dealt the fatal blow. The offending monster will be marked with an extra life icon; stronger monsters will allow more time to kill them.

In Horde Mode, players begin with three extra lives and can collect more as they progress; running out of lives will force the player to start again from the beginning. On completing the game, every remaining extra life is converted to 1,000 bonus points each.

Horde Mode introduces a 3UP item that is given for successfully completing a bonus round, and awards three extra lives. 1UP items are given at the end of each arena round once all the weapons are obtained; they are also given if a bonus round is not completed successfully.

The following achievements involve collecting extra lives, and will also tick off their corresponding milestones: