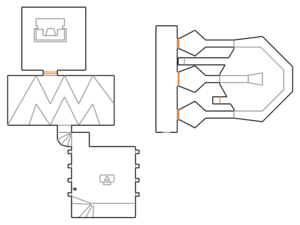 The new architecture added to the map seems tentative and experimental. The spawning room contains an elevated platform with zombiemen and a spiral arrangement of exploding barrels which can be set off to kill them. This is somewhat reminiscent of the changes made to the opening area of E1M8: Phobos Anomaly for its console version. Outside of this area is a hallway with a distinctive "zig-zag" pattern built into the ceiling and a set of imps arranged in an arrow formation. Beyond this is an elaborately constructed area containing a demonic altar and a significant amount of enemy resistance, including multiple demons, cacodemons, and barons of Hell.