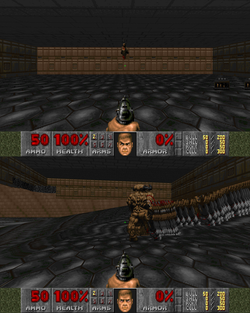 Example of fake floor in wow.wad. (Top: Before jumping in the pit, bottom: Inside the pit.) Notice the Hall of mirrors effect due to lack of a texture on the walls of the pit.

A fake floor is a map design technique consisting of a lowered sector forming a pit which has no lower textures on its surrounding walls. This creates an illusory floor at the level of the surrounding sector, above the actual floor height. Amongst other uses, this technique can be implemented using a relatively deep pit to hide monsters which are raised to attack the player, or with a shallower one to add a deep water effect. Another use of this technique is to create sectors which have differing brightness between their floors and ceilings.

The reason for the existence of this phenomenon is related to Doom's visplane system, which draws floors and ceilings using a flood-fill-like algorithm. Since the surrounding lines have no textures to interrupt the drawing of the surrounding sector's flat, it "flows" out of its sector's boundaries to cover the other sector. 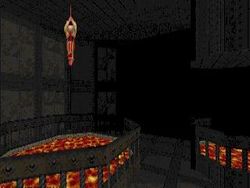 The technique is discouraged for use with modern source ports, particularly ones that use hardware rendering, as the trick mostly works only on the original software renderer.

A notorious joke WAD called Wow uses this effect in a comical way, calling a fake-floor pit the player may fall into an illusio-pit. This name has become a widespread and popular term for the phenomenon.