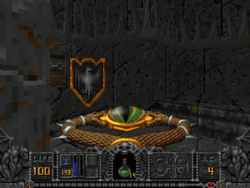 The shield has been discovered in the Guardian of Fire. Parias benefits from it the most.

The Falcon Shield is an item in Hexen that increases the character's armor class. Its appearance is similar to that of the Enchanted Shield of Heretic, but it is taller and has an image of a falcon on it rather than a face. The Fighter receives 4 points of armor, the Cleric receives 5, and the Mage receives 3. The item is initially found in the Guardian of Fire.

In the IWADs the falcon shield is first encountered on these maps per skill level:

The IWADs contain the following numbers of falcon shields per skill level: