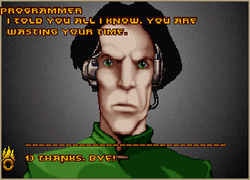 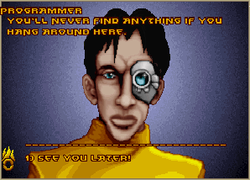 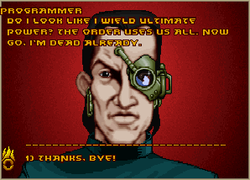 The False Programmers are a trio of characters seen in the Castle levels of Strife. Each false programmer resides in a different level. One is in the main castle level. Another is in the Training Facility level, and the third is in the Audience Chamber.

The one in the main castle wears green and is the only one without a large attachment over his eye. He tries to trick the player into believing that the story about the Programmer was invented to scare people, when in fact it is true.

The second one is in the Training Facility, dressed in yellow, and seems to be the nicest of the three. He explains about the training facility, and even jokes about it being possible to kill the real Programmer if the player can pass the tests of that area.

The third is in the Audience Chamber, clad in teal, used as bait to lure the player into a trap. When confronted, he explains the plan and gives the player the key (Silver Key) to the real Programmer's keep. This false programmer claims that he himself is "dead already," perhaps meaning that the Order has been notified about him helping the player and is going to punish him.

They are all voiced by Peter Morgan (IMDb).