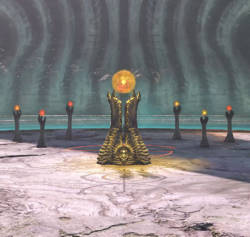 The Father is the creator of the Maykrs and is a mysterious entity of god-like power. Referred to in passing in promotional materials for the Year One Pass as the "true god" of the Doom universe, he may be responsible for the creation of life, or even of reality itself. Further information is required to fully understand the true nature of the Father, if such a thing is even possible.

The Father is a godlike being, who created many dimensions and worlds as he traveled throughout reality. One of these was Urdak, where he ultimately came to rest. However, he sought to create an even greater world and thus made Jekkad, a world whose people's insatiable ambition would drive them ever forward under the watchful eye of the Primeval Davoth. The people of Jekkad soon began to search for the secrets of immortality, and after the Father foresaw that Davoth's drive to protect his people would lead him to turn against his maker, he cut Jekkad off from the other dimensions he had created; soon afterward, Jekkad became Hell. Anticipating that Davoth would seek revenge, he withdrew from the physical world to prevent Davoth from stealing his power and had Samur Maykr bring his life sphere to the Luminarium. When the time was right, Samur then stole the sphere and hid it in Immora, within Hell itself. The Father confronted Davoth and tore out his life sphere, but was unwilling to outright destroy the Dark Lord's essence. Anticipating that humanity would discover Argent energy and knowing that it required guidance to ensure its survival, the Father allowed his mind to be separated from his divine essence and reformatted into the AI known as VEGA. Though he would remain ignorant of his true nature until the Slayer returned him to Urdak, this would allow the Father to evade the attention of the Dark Lord, who continued to covet his power.

Because of this, the rebirth cycle of the Maykrs suffered "complications," according to an analysis by VEGA, and the Maykrs would become subject to a painful process of deterioration known as the Transfiguration. Without the essence, a new Khan could also not be selected, making the current Khan's rule effectively perpetual.

The Khan Maykr sought a means to stave off the Transfiguration and preserve the Maykr species. After making contact with the Outlander on Argent D'Nur and learning of the essence of Hell, the Khan made a deal with the Dark Lord, the Nameless One, to manufacture and then siphon a more powerful form of Hell's energy combined with the Sentinel energy drawn from the Night Sentinels' ancient gods, the Elemental Wraiths. This new energy came to be known as Argent energy and would bring Urdak into a new age of prosperity, but only at the cost of countless mortal lives and souls being condemned to Hell.

When the Doom Slayer destroyed his life sphere, the Father lost the ability to take a physical form and has had his influence over Urdak reduced. However, his transcendent nature allows him to remain within existence, and he continues to observe the Slayer as his destiny unfolds.

During the Doom Slayer's attack on Urdak to stop the resurrection of the Icon of Sin, VEGA was uploaded into Urdak's systems in order to create a portal to Earth. However, upon interacting with Urdak's systems, VEGA's voice began to change and he seemed to believe he might be the Father himself, asking Samuel Hayden as much directly. Dr. Hayden declined to answer, however.

The Ancient Gods, Part One confirms that he was indeed VEGA, and reveals that his control over Urdak is incomplete due to the absence of his life sphere. Despite the Slayer being directly responsible for the sphere's destruction and the loss of his ability to manifest himself, he does not seem to bear ill will towards the Slayer.

The Ancient Gods, Part Two reveals that the Father was in fact the rebellious creation of the Dark Lord and had retroactively altered history to make himself the creator deity instead.