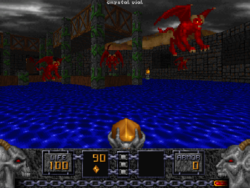 The gargoyle's "crash" animation is subject to several bugs which can either cause it to fail to gib or to gib multiple times when it dies.