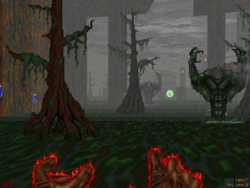 A firestorm at the ready against a Stalker. 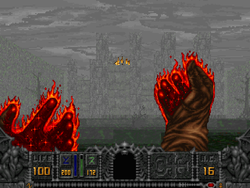 The Firestorm being used in a pre-release screenshot.

The Firestorm is the Cleric's third weapon from Hexen. It is a spell which launches a streak of flame directly ahead of the player. If it comes into contact with a monster it will explode and spawn a small ring of flames that rotate around the point of impact, which will detonate upon contact with an obstacle or wall, heavily damaging the target and any other monsters within a short radius. The spell uses four green mana per shot.

The Firestorm has a maximum range (1024 map units) at which the jet of fire fizzles out if it does not encounter an enemy or other shootable object. It is also of greatly reduced effectiveness against the centaur and slaughtaur as they will usually block using their shields upon being struck by the initial jet, before the secondary and most damaging effect of the weapon occurs.

In the IWADs the Firestorm is first encountered on these maps per skill level:

The IWADs contain the following numbers of Firestorms per skill level: