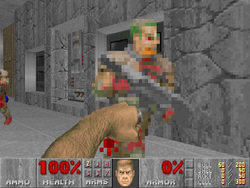 Fist being used on MAP02: Underhalls 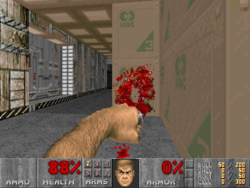 An imp makes the acquaintance of the berserk fist on E2M2: Containment Area
This article is about the weapon in the classic Doom series. For other versions of this weapon, see:

The fist is the player's stock melee attack. It is always available unless the player has picked up a chainsaw. Punching is only about as effective as a pistol shot, however, unless the player has collected a berserk powerup, which increases the power of the fists tenfold. A berserk punch is somewhat more effective than the chainsaw and (unlike the normal fist) can be used instead of it. It does, however, have the disadvantage of not doing continuous damage, which leaves the player open to counterattacks. While the chainsaw drags the player erratically toward the enemy, the fist does not change the player's position, and only re-adjusts his angle at the moment of a successful hit. This means that the fist requires more careful aim than the chainsaw, but may be preferred while in precarious situations such as near damaging floors, crushers, corners used for cover, or narrow bridges. Likewise, it is safer to trigger a barrel explosion with the fist, as the finishing punch propels the beaten monster or barrel away while not pulling the player toward the object.

The damaging hitscan effect of the punch is inflicted two frames into its animation. The fist is not completely extended at this point, and consideration of this lag can help in timing punches effectively. The range of the attack is 32 units.

"Fist can be used to deliver a punch to the enemies. It will always be with you."
― Doom instruction manual 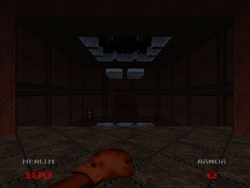 The fist from Doom 64, now wearing a brown glove. 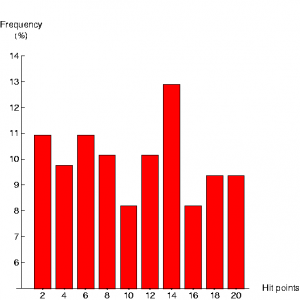 Damage done by a punch (non-berserk) 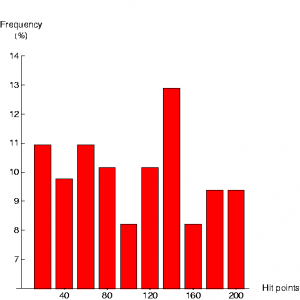 Damage done by a berserk punch